The plot may be weak, but that's not why we're here! Made for the biggest fans of our favorite creepy, kooky, mysterious, and spooky family.

Rated PG for macabre and suggestive humor, and some action. 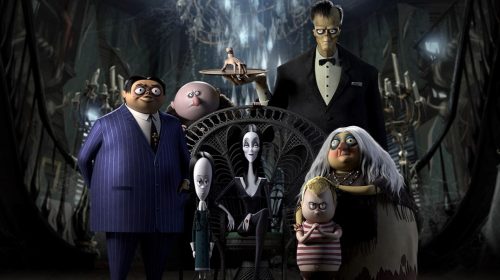 Creepy, kooky, mysterious, spooky, ooky, animated. While one of these things is not like the other, the new film from directors Greg Tiernan and Conrad Vernon (both directors of Shrek 2, Monsters vs. Aliens, and Sausage Party) prove The Addams Family work in any format. While they’ve been animated before on television, this is the first animated film to be released theatrically. For those keeping track, it’s been 26 years since the goth-like family was last on the big screen, and it’s fantastic to have them back!

I seem to be in a minority here — not one adult who attended the screening with me liked it — as it sounds like some audience members have a major misconception regarding the entire enterprise. Yes, the Matt Lieberman screenplay doesn’t exactly offer up anything new, but at least the characters remain the same.

Wedding bells are ringing for Gomez (voiced by Oscar Isaac) and Morticia (voiced by Charlize Theron). But just as they say “I do,” the townsfolk show up to wage war and drive them out. The newlyweds hit the road in search of the worst place they can settle down in, winding up in New Jersey — a nod to Charles Addams’ hometown. And while they find an abandoned haunted asylum to call all their own — after Thing runs down escaped mental patient Lurch (voiced by co-director Conrad Vernon) — 13 years later we catch up with the rest of the clan: Wednesday (voiced by Chloe Grace Moretz) and Pugsley (Finn Wolfhard).

The rest of the family are soon on their way to join them for Pugsley’s Mazurka, including Uncle Fester (voiced by Nick Kroll), cousin It (voiced by Snoop Dogg), and Grandma (voiced by Better Midler). And wouldn’t you know it, the fog surrounding their home has lifted as the marsh is drained by reality TV host/interior designer Margaux Needler (voiced by Allison Janney). Now the Addams’ have to deal with the new town of “Assimilation” below. Things go from bad to worse when Wednesday enrolls in middle school and befriends Margaux’s estranged daughter Parker (voiced by Elsie Fisher), while Margaux hatches a diabolical plot of her own to turn the town against the Addams clan.

Growing up I loved the original TV series, and the Barry Sonnenfeld classics even more. While Addams Family Values may have been the epitome of what Charles Addams’ creation could be, this is a fantastic reboot, ushering the family back into the spotlight — even if straddled with a PG rating. Double entendres and twisted visuals reign supreme with the voice cast relishing every line. Raul Julia, Angelica Huston, Christopher Lloyd, and Christina Ricci may have left their mark on their characters, but it’s easier to separate the new versions with this animated one.

Directors Tiernan and Vernon make sure they kick things off with a gag a minute, although things do start to slow down as the plot starts to take over in the third act. There was also a missed opportunity of truncating Wednesday’s time at middle school with too much attention focused on the Assimilation shenanigans. A film about The Addams Family should be about them, we didn’t come here to see what the neighbors were up to. Stillt, Addams fans will be snapping their fingers with glee by the time the end credits roll. And while this first entry may play things a little safer than expected, I can’t wait to see where it goes from here!