Never made to be high art, it's purely for fans of hardcore horror who love practical effects and kickass final girls. Available on Screambox or probably still at a theater near you. Made for fans of excessive gore. 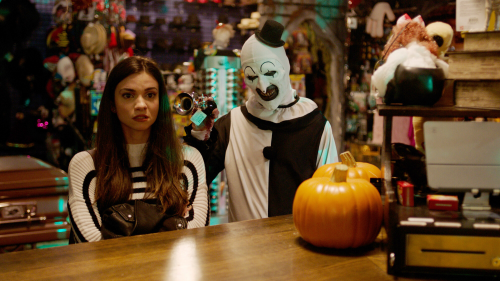 Terrifier 2 will never be confused with high art. Not that its endless parade of gore and depravity will stop its creators from submitting it for Oscar consideration — true story. But for what it is, T2 stops at nothing to make sure you get your time and money’s worth. Writer/director Damien Leone returns, along with our new favorite icon, Art the Clown (David Howard Thornton also returning), wreaking havoc the likes the world of horror may have seen before, but perhaps not to the casual viewer. For those with weak stomachs — or who may not watch gorefests ad nauseam — you’ve been warned.

Terrifier 2 picks up right where the first left off, finding Art the Clown mysteriously rising from the dead, making quick work of a poor Coroner (Cory DuVal). One year later, we find Art still on the loose, sharing some kind of connection to Sienna (Lauren LaVera) and her brother Jonathan (Elliott Fullam). The siblings are dealing with the trauma of their deceased father, but that won’t stop them from enjoying their Halloween shenanigans. Little do they know, Art has his sights set on both of them, and it’s going to be a gruesome fight to the finish the likes they’ll never forget.

2022 has been a fantastic year for horror films. For those looking for something less mainstream, Terrifier 2 delivers a deliriously fun cesspool of debauchery. Art continues to carve up the competition, cementing an icon status, while finding himself a fantastic final girl in Sienna. LaVera gives an amazing performance, but sometimes it’s only in these ultra low budget affairs that we can find such rising stars.

Speaking of the low budget, it’s insane that this was crowdfunded and made for just $250,000. Leone makes sure you see every penny oozing from the screen, with spectacular practical effects that would be right at home in any ’80s outing. And not even the 2+ hour runtime can spoil the fun. Just when things seem like they could be slowing down, it hits you with another splatacular death sequence. While I may have been more disturbed by the big kill in the first Terrifier, there’s more than enough here to give gorehounds exactly what we came for. There’s also a nice Nightmare on Elm Street 3 vibe to some of the new slight supernatural elements.

While Terrifier 2 is more than ripe for the communal theatrical experience, there’s bound to be plenty of viewers thankful to watch the film from between their fingers at home. Terrifier 2 is still playing in theaters nationwide, but can now be found streaming on Screambox as well. Something extremely useful for those needing fast access to their own private toilet, in case anything they’ve eaten recently decides to make a round trip back up. Which I’m sure is the highest praise Leone was looking for anyway.