One of the year's best, Hanks is phenomenal as always. Made for Hanks fans, biopic lovers, and anyone interested in the human side of drama.

Rated PG-13 for some peril and brief strong language. 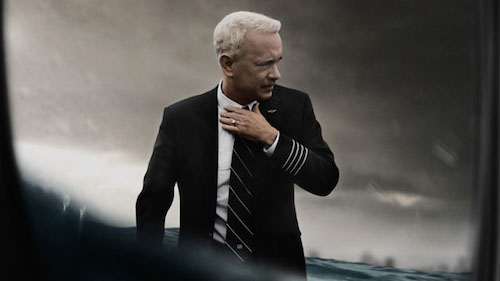 Chesley “Sully” Sullenberger is such a real life hero, it’s not surprise he received the big screen treatment. Since he’s portrayed by Tom Hanks, I should have known better than to question the casting aspect of Sully. It’s director Clint Eastwood who could easily be called into question. The man hasn’t directed a slam dunk in years. Even with all the love showered upon American Sniper, it was still every bit as boring as Jersey Boys, J. Edgar, Hereafter, Gran Torino, and Changeling. What’s funny is that his most entertaining movie of the last eight years is probably his least seen, Invictus. Considering audiences already know most of what happened on January 15, 2009 to US Airways Flight 1549, we finally get to see the human side of the Miracle on the Hudson.

Sully is suffering from PTSD after landing on the Hudson and saving everyone on board. His mental state isn’t helped by the National Transportation Safety Board’s investigation questioning his decision to make a water landing after a bird strike took out both engines. With Charles Porter (Mike O’Malley), Ben Edwards (Jamey Sheridan), and Elizabeth Davis (Anna Gunn) breathing down his neck, Sully has his co-pilot, Jeff Skiles (Aaron Eckhart) standing by his side —  who is just as thankful for Sully’s quick thinking as much as anyone else on board. The NTSB insists that he could have made it back to either LaGuardia Airport or Teterboro Airport with minimal damage. But Sully knows he made the right choice, and stakes his entire reputation upon the salvation of all 155 passengers.

It’s only pointing out the obvious that Hanks is a blessing in any movie.  He’s one of the greatest actors working today and brings his all to even the most introspective roles. Sully is another notch on the man’s belt and he’s showing no signs of slowing down. While he may still have some Dan Brown paycheck films to work out of his system, he’s still got plenty of life left in him. The rest of the cast also lend a hand in keeping the film afloat. Eckhart is one of very few moments of levity for such a heavy-handed drama. Laura Linney could have been wasted playing Sully’s wife Lorraine, but she manages to shed some light on the love and possible marital strife going on at home.

As good as Hanks is, the film’s biggest detriment lies in Todd Kamarnicki’s screenplay. Based on the book Highest Duty by Sullenberger and Jeffrey Zaslow, the film is focused on one man’s plight to prove he did the right thing. Sully is a pilot doing his job and never stopped until all 155 passengers were accounted for. While he may have moments of self doubt, it only shows that he really is human, and his big speech during the NTSB only hits harder because of this.

Eastwood does get to put us through the wringer a number of times, with varying accounts of the landing, but never letting the truthers get their glory. This is not a smear campaign; Sully was just a man at work, doing the best he could during a moment of crisis. It’s not always the easy thing that’s right, and the situation very easily could have turned out badly for everyone involved. Thankfully, Sully is a fantastic human drama, shedding a little more light on a terrifying reality. This is one of the year’s best films and Hanks easily gives one of the year’s best performances.