Star Wars: The Rise of Skywalker

Production issues shine bright as Abrams tries to piece together a finale that was obviously never planned from the beginning. Made for Star Wars fans, obviously. 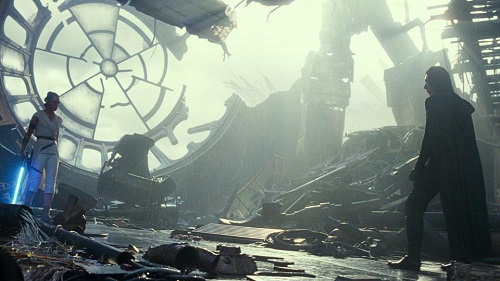 Most folks have all kinds of stories involving the Star Wars films. Mine is pretty simple. I was not the Star Wars fan I am now prior to my wife buying me the original trilogy on Blu-ray. She couldn’t believe I didn’t own them, and truth is, back then I didn’t love them. One one hand, these films are not as personal to me, but I at least came to realize what I’d been missing.

And while I may not be a fanboy — I know plenty — my life has become pretty steeped in its pop culture. As I write this, I’m wearing the fleece BB-8 jacket my mother-in-law made me. So as far as The Rise of Skywalker closing out a nine film story arc goes, it works extremely well at both providing some fun moments of fan service and trying to wrap  up a world that spans 42 years of Episodes and spin-offs, TV shows, holiday specials, video games, and comics.

A mysterious broadcast has been heard throughout the galaxy. The phantom Emperor — Palpatine (Ian McDiarmid) — is scheming something big and Kylo Ren (Adam Driver) is tracking him down. Rey (Daisy Ridley) is trying to piece together her training while confronting her past. Meanwhile, the Final Order is on the rise under the tyranny of Supreme Leader Ren, in spite of a mole feeding information to the Jedi resistance. A definite end is nigh for both camps as the ultimate duel inches closer.

Considering the amount of backlash unleashed upon Rian Johnson’s The Last Jedi, insurmountable expectations were placed upon co-writer/director J.J. Abrams’s shoulders. Returning to the helm without missing a beat, fans get more of that nostalgic Star Wars tone he brought to The Force Awakens, while trying to tie up all the loose ends brought on by TLJ. How you feel about The Rise of Skywalker comes down to one thing: how you felt about The Force Awakens and The Last Jedi.

On one hand, it almost feels like TLJ barely exists. Skywalker continues to build upon both films, but at the same time, the tone is so much more Force Awakens, you would never be confused if you happened to skip TLJ. That’s no slight to Johnson, it just feels like Abrams — along with co-writer Chris Terrio and producer Kathleen Kennedy — took the high road and continued making the series their own. Whether some like it or not.

We’ll never get to see how George Lucas would have ended his own franchise, but that’s what he gets for selling out to Disney. Granted, we might have never seen any more Star Wars films had it not been for the media conglomerate.  At the end of the day, the cast and crew give it their all and that’s about all we can expect. I encourage everyone to head out to see it so they can make up their own minds.

The cast and crew swing for the fences. They know they’ll never be able to make everyone happy, but damn if they don’t try. From here on, there are no more Skywalker movies in the pipeline and we all should just be ecstatic that a finale even exists. The Rise of Skywalker is the culmination of most people’s entire cinematic lives so far. This is it, folks, it’s really over. You won’t find any spoilers here. I would never do that and neither should anyone else.

The Rise of Skywalker is probably the epitome of “critic proof.” So the best advice is to gather up your friends, head on out to the theater, buckle in tight, and bid farewell to one of the biggest franchises on the planet.