Great fun for everyone, with plenty of jokes only the smartest adults will get. Made for stop-motion/Aardman fans and families. 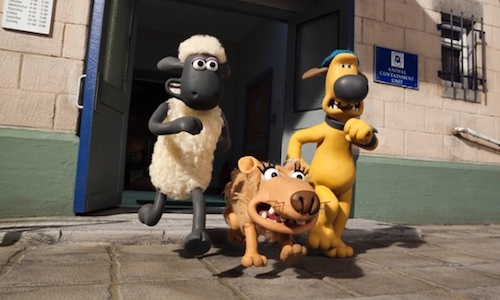 While never really finding a box office niche, Aardman Studios never fails to deliver on shear entertainment. From the Oscar-winning adventures of Wallace & Gromit to Chicken Run, the stop-motion animation house churns out more delightful entertainment than you can shake a stick at. Something that continues yet again with the full-length Shaun the Sheep Movie. With only one semi-misfire with their foray into computer-animation (Flushed Away), when it comes to painstakingly produced stop-motion, they have a stellar track record. The only studio giving them a run for their money is Laika (Coraline, ParaNorman, The Boxtrolls), but there’s plenty of room for both studios when the audience can have this much fun.

Shaun (voiced by Justin Fletcher) loves his life on the farm under the loving guise of The Farmer (voiced by John Sparkes). Along with canine Bitzer (Sparkes again) and the rest of the flock, they live a peaceful — if boring — life in the country at Mossy Bottom Farm. One day, Shaun and his fellow sheep decide they want to have a bit of fun and wind up putting The Farmer into a deep sleep. They hide him inside a trailer and before you know it, the trailer is freed from its resting spot and is on its way to The Big City with The Farmer in tow. Now, Shaun, Bitzer, and everyone else, must follow to save The Farmer after a case of amnesia turns him into a haircutting genius. That is, so long as they can stay out of the grasps of the conniving Animal Containment Unit’s Trumper (voiced by Omid Djalili), who will stop at nothing to see the flock behind bars.

It’s all pun and games for Shaun the Sheep and his first movie. And there’s nothing wrong with that. Chock full of brilliant visual gags, that pretty much sums up the whole movie — especially considering there isn’t one line of dialogue in the entire 85 minutes. Yes, this is basically a silent movie — think WALL·E meets Aardman and you’ll know what to expect. Harkening back to the days of Charlie Chaplin and Buster Keaton, there’s no end to the priceless parade of hilarity. There’s even references for the adults. Who knew Silence of the Lambs jokes could still be so hilarious?! This is all-around good, clean, family entertainment of the highest order. While it may not reach the newly discovered emotional heights of Pixar’s Inside Out, it never dumbs itself down. Something that’s remarkable considering the lack of dialogue. Do not miss Shaun the Sheep Movie or ewe’ll be sorry.