Shang-Chi and the Legend of the Ten Rings

This is the MCU introduction we've been waiting for. An origin story that also works as a stand alone with just enough referencing to remind us where things are heading. Made for MCU fans, martial arts fans, or audiences who have been waiting for the next big thing.

Rated PG-13 for sequences of violence and action, and language. 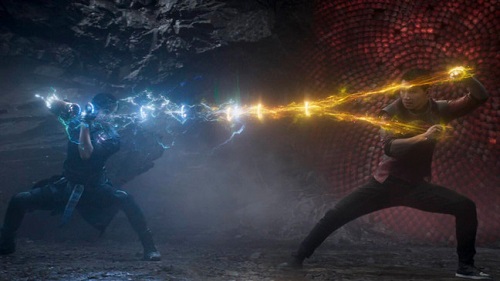 Director/co-writer Destin Daniel Cretton has finally achieved something extraordinary within the MCU: an entry literally unlike anything we’ve ever seen before. Shang-Chi is one of the best MCU films and I officially have a new favorite Marvel hero at the top of my list. Cretton pulled out all the stops. This is what the MCU is all about: exhilarating action sequences, tons of laughs, and heart for days. The bar has been raised exceedingly high and if they can keep this kind of momentum going, Phase Four is going to be an incredible ride.

Shaun (Liu) is your typical San Francisco slacker. He just wants to hang out with his best-friend/coworker, Katy (Awkwafina), park cars, and sing karaoke. But fate has other plans when Razor Fist (Florian Munteanu) of the Ten Rings organization — ruled by Shaun’s father, Wenwu (Tony Chiu-Wai Leung) — arrives to steal the pendant Shaun’s mother Li (Fala Chen) gave him. Wenwu believes that the amulet can help him find Li, as he’s convinced she’s still alive, being held captive behind “The Dark Gate” in her homeland, the mystical Ta Lo. Now, Shaun must come to terms with destiny, face his father, save Ta Lo, and rise up to be Shang-Chi once again.

It’s nice to see an origin story when done right. Focusing on Shang’s journey, and not trying to shoehorn in as many MCU references as they can, really sets the film apart. Aside from a super quick joke about the Snap/Blip, Cretton keeps the film coasting on its own merits. Although there is one fan-favorite character returning from a past entry. Don’t worry, I’m not spoiling it. In doing so, Liu and Leung are able to spend time making credible foes as a father and son facing their pasts as their futures collide. Leung brings a performance that simply elevates every scene he’s in. While Katy may not exactly get a full arc, she’s a much better use of an expositional character than Cole Young could have ever dreamed in Mortal Kombat.

For those more familiar with the comics, fear not, there is thankfully no mention of the offensive Fu Manchu. Making Wenwu the leader of the Ten Rings (aka “The Mandarin”) was a stroke of brilliance and brings the MCU full circle to Iron Man and Iron Man 3. There may not be any mention of MI6, but with sequels already in talks, we still have time. It would also be interesting to see them branch out to show us Xialing’s rise, and the creation of her underground fight club, during her brother’s 10-year absence. I would totally watch a weekly “Golden Daggers Club” series on Disney+.

Funkos, Legos, an omnibus, plush, and a “Little Golden Book,” the power of Shang-Chi is in full force at our house. I cannot wait for everyone to finally meet Morris and the rest of the Ta Lo clan. As much as I enjoyed the film, my only regret is that it wasn’t on IMAX. As always, it’s been reformatted so that’s exactly where you’ll want to see it. There are two end-credit scenes, so make sure to stick around as usual. And while I approve of Disney following through with a 45- day theatrical window, I would absolutely hand over $30 to watch Shang-Chi again right now. Everyone involved should be extremely proud in helping bring us one of the best MCU films, period.