A bland action movie that lacks the fun and wit of the original folktales. Made for action movie fans. Robin Hood fans should steer clear of this bland attempt to revisit their legendary hero. 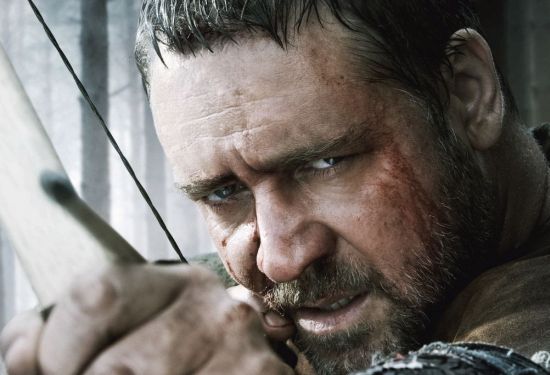 There was talk that Ridley
Scott’s new “Robin Hood” tale was going to be a pale copy of “Gladiator” only
this time taking place in England.
Scott productions alum, Russell Crowe was set to play the legendary outlaw, and
the trailers made it appear more battle-centric than a character study. So, how
does it turn out? A bland film that has little to none of the charm and with
that the original folklore has.

Scott’s watered down version
of “Robin Hood” is neither a fantastic cinematic spectacle nor is it a complete
mess. It’s somewhere in between, mediocre land. This is supposed to be the
story of how Robin Longstride, became Robin Hood. What a perfect platform to
showcase the character. Let us in on his inner workings, what makes him tick,
and why deep down he’s such a great and moral guy. Too bad much of the
opportunity for that is squandered for quickly cut, staccato action scenes that
have become Scott’s M.O.

Robin Longstride is a lowly
archer fighting in King Richard’s army. King Richard has been sacking castle
after castle for riches and power. The people of England have been taxed to the hilt
in order to pay for his war campaigns. When he is killed in battle, his
sniveling weasel of a brother, John, takes over the throne. First order of
business, destroy the kingdom as quickly as possible.

Robin Longstride has found a
home in Nottingham, with Marion Loxley (Cate
Blanchett, “The Curious Case of Benjamin Button”), taking over for the deceased
Robert Loxley.

Save one conversation
between Longstride and King Richard, we are never let in on the character of
the soon-to-be Robin Hood. Isn’t his character the most important thing? Scott’s
Robin Hood is an action man, charging full steam ahead, hacking off limbs in
battles, and looking very gruff while doing it.

The entire cast of beloved “Robin
Hood” characters takes a back seat. It’s as if mentioning them by name is
really enough to satisfy the audience. That’s Little John, that’s Friar Tuck,
and that’s it. The characters, including Robin and Marion, all seem so flat and
generic. Little substance resides here. Even the villain Godfrey, is little
more than a man who looks sinister much of the time.

The character development is
one problem, the gaping plot holes are another. At one point, Robin and his men
surround Godfrey and his men. Robin rounds up Godfrey’s men, but magically
Godfrey is nowhere in site. Where has he gone? Well, he’s traveled quite a
distance to get ready for the requisite showdown he must have with Robin. How
he got out, is anyone’s guess. The story must move along, Robin and Godfrey
must meet on the battle field. You know, one of those battles where men are
dying all around, but the two main characters can spot each other over the
crowds, find their ways to each other, and start fighting.

The color palette is dingy
and dark, much like “Gladiator” was, but this is beautifully green English
countryside, and still it seems murky. Everyone, especially Crowe, talks in
mumbles. You almost need subtitles to understand half of the lines of dialogue
spoken from the Englishmen.

Perhaps the saddest thing
about the movie is the Sheriff of Nottingham is a complete imbecile, and in no
way resembles Robin Hood’s great foe that he is to face later on in his
adventures of taking from the rich and giving to the poor. The Sheriff here is inserted
for nothing more than comedic relief. This is a Sheriff that will not give any
problems to Robin Hood in the future, which creates a bleak outlook on an
already bleak movie experience.