A bad, over-manipulative drama with decent spurts of typical romance and an offensive ending. Made for fans of Robert Pattinson and bad romance flicks/books. 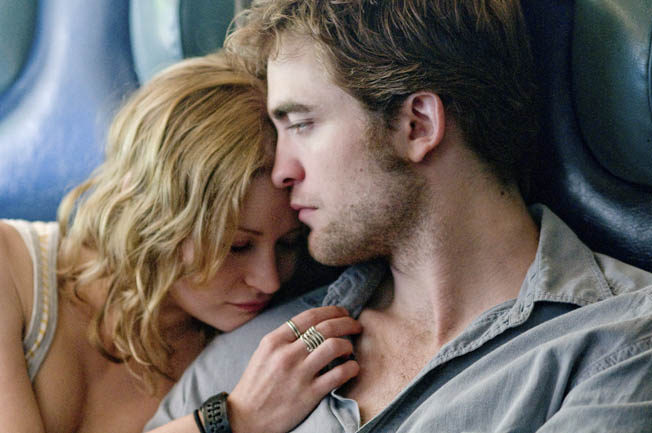 Remember Me is the type of movie that is hard to write about out of fear of the review turning into a rant. There are so many things working against it, that with so few working for it, the scale is grossly tilted to “bad” side.

The main reason women will flock to Remember Me is because of its lead actor, Robert Pattinson – and even then, the only reason they want to see him is because he plays Edward in the Twilight series. Let’s be honest; we know they’re not going to see him for his acting abilities – because he doesn’t have any.

Pattinson plays Tyler, an undecided college student who is trying to juggle a million things at once while keeping his composure. Five years ago, his heroic older brother committed suicide. His mother and stepfather have dealt with it pretty well, but he and his younger sister are still learning to cope with it. Their father (Pierce Brosnan, James Bond) has always been too wrapped up in his law firm to care about his family.

The majority of Remember Me is about Tyler trying to put his family back together again. The remainder is about Tyler’s movie cliché romance with Ally (Emilie De Raven, LOST). In one typical romance scene at the beginning of their relationship, Ally refers to their banter as something she’s “seen one hundred times before” in other movies. Ally couldn’t have said it any better. There is nothing original in Remember Me. You, too, have seen it one hundred times before – which is sad because some of the scenes between Ally and Tyler are the most interesting in the movie. The rest are simply boring and drab.

In an attempt to not spoil the surprise ending, I will be vague. Something blatantly manipulative and uncalled-for happens in the end. This event is offensive – so offensive that it deserves picketing and boycotting more than any film of the past. Everyone in America should be offended.

But the surprise ending isn’t the only bad thing about Remember Me. The whole thing is terrible. The script. The story. The acting. The direction. The cinematography. The editing. Everything. Pattinson is painful to watch in supposed-to-be emotional scenes. The direction is so “textbook,” basic and unmotivated that it is embarrassing to see good actors like De Ravin, Brosnan and Chris Cooper (The Bourne Identity) in a movie this bad. The dialogue tries too hard to be “cool,” coming across like a Diablo Cody script (Juno) – giving everything it has to being “hip.” The coolness of it all takes the heart and honesty right out of it.

Borrowing words from Pattinson’s character Tyler, “I’d rather be sodomized by a toothbrush” than have to watch Remember Me ever again.