Zac Efron is to "Charlie St. Cloud" as Robert Pattinson is to "Remember Me." Made for teenage girls and people who think the Lifetime and Hallmark networks put out great movies.

Rated PG-13 for language including some sexual references, an intense accident scene and some sensuality. 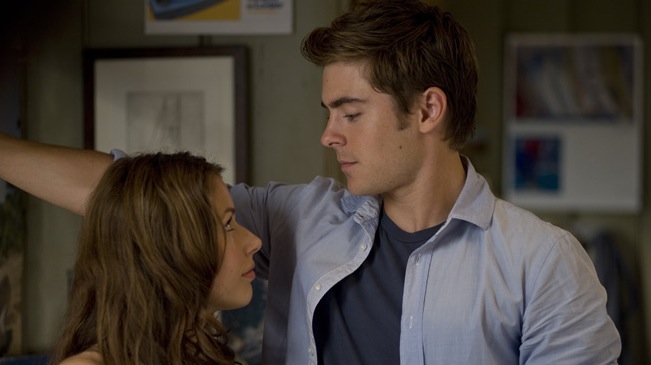 *Note: This is an extremely unprofessional spoiler-filled review. Read at your own risk!

When Robert Pattinson’s Remember Me started receiving bad reviews, girls and Twilight fans everywhere said they would see it anyway and love it just because Pattinson was in it. But when they saw how terribly offensive it was, they had to submit and agree – it was aweful. Charlie St. Cloud is going to be the same way. It is so stupidly offensive that even the biggest Zac Efron (High School Musical) fans will walk away shaking their heads.

Normally, reviews tend to stay away from plot-spoiling topics to not give the film away – but the only way to convince you not to see Charlie St. Cloud is to burst to the dam and let it out. Here it goes.

The opening sequence to Charlie St. Cloud shows Charlie (Zac Efron) and his brother Sam (Charlie Tahan, Nights In Rodanthe) trying to win a sailing race. To be honest, it is a pretty good opening scene to a movie – it is tense, fun and a bit reckless. But it all goes downhill from there.

The first 15 minutes of Charlie St. Cloud try to establish the story and characters, but it fails miserably at both. Instead of feeling like you are watching the movie, you feel like you are watching an extended trailer for the movie. Nothing flows well. The characters and situation are undefined. There is no motive for anything we see. For example, their mother (Kim Basinger, Batman) is a single mother who works full-time. In one scene, she picks up a last-minute late shift and races off to catch the last bus. In the next scene, Charlie and Sam are driving around in their nice family car. Why in the world is the mom taking a bus when the kids have a car?!

Then the car accident happens. Charlie and Sam both die, but Charlie miraculously comes back to life in the ambulance on the way to the hospital. Sam does not. At the funeral, Charlie breaks down and leaves unexpectedly, running into the same forest where Charlie and Sam were supposed to meet everyday at the dusk to practice baseball techniques. To his surprise, Ghost Sam is there, ready to practice just like they had arranged. Charlie promises to meet him there every day at the same time to honor his part of the pact. And the movie continues to jump around like a trailer.

After a terrible transition, we jump five years into the future. Instead of accepting his prestigious sailing scholarship to an Ivy League school, Charlie is living on the cemetery property and working as the caretaker so he can easily play ball with his dead kid bro every day. He is now known as the town loon.

As if seeing his dead brother wasn’t weird enough, in one scene he also sees the ghost of a buddy (James Franco’s real life little brother Dave Franco, Scrubs) who died in Iraq. Although we, the audience, find that a little strange, he doesn’t. Charlie just writes it off. He has never seen another ghost before and will never see another one after.

While working, Charlie runs into his now-famous high school sailing rival Tess (Amanda Crew, Sex Drive) as she visits her father’s grave. She is only in town for one week before starting a 6-month around-the-world sailing race, so if Charlie is going to make a move on her, he has got to do it fast.

Zac Efron must have only read this far into the script when he signed on for Charlie St. Cloud – after this, it turns to the absurd. Something is obviously not right with Tess. You will suspect she is a ghost. But then they have sex on the grass in a foggy cemetery, so you will think she is not a ghost. The morning after Tess goes through a poorly executed Sixth Sense-ish realization when her reflection is missing from a storefront window and nobody can see her. At the same time Charlie learns that her boat is missing and realizes that she was ghost all along. The oddest thing is that he is not even creeped out about having sex with a ghost the night before.

Another twist follows shortly thereafter – Tess is not really dead. She is just unconscious somewhere. And now Charlie must find her. But the question is this: if Tess is not dead, then who did he have cemetery sex with the night before? Was it her spirit? Her soul? This idea will boggle your mind more than the sappy love story at hand.

As Charlie becomes wrapped up in his feelings for Tess, he has a harder time making his daily appointments with Sam. Sam tells Charlie that he feel that he is being forgotten, replaced. You will get the impression that if Charlie misses practice one day that Sam will disappear, not unlike Marty McFly if his parents never get together at the “Enchantment Under The Sea” dance. I will spare you the sap from the last ten minutes of the movie because you can guess where this is going – nowhere. The ending makes absolutely no sense. And the when extraordinary events are explained to ordinary characters, they simply accept it and never doubt.

Semi-decent performances by Efron and Crew earn Charlie St. Cloud half a star, but that is it. Nothing believable nor heart-felt can be found in it – it is a boring and bland story. It is painfully obvious that the writers came up with a dumb niche (Charlie seeing his dead brother) and tried writing a love story around it. Although the less-than-interesting story about the dead brother is integral to the rest of the story, the dead brother storyline is secondary to the romantic one being told. Had Charlie St. Cloud passed through a few rewrites, deleted the ghost sex/masturbation and found its focus, it could have been a decent movie. But as is, it is unwatchable.