George Lucas strikes again - this time with an embarassing portrayal of the Tuskegee Airmen. Made for fans of really bad action movies that try passing themselves off as historically accurate.

for some sequences of war violence. 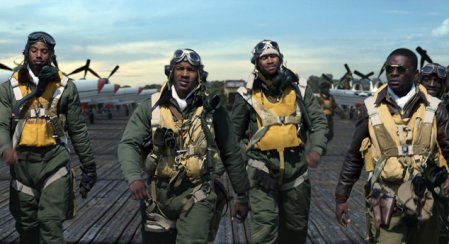 George Lucas is said to be super controlling. After watching Red Tails, which lies under his Lucasfilm banner, I believe it. Although he only served as executive producer, watching the movie, you’d think that he wrote and directed it too. It’s obvious that he had his hand in every aspect of this terrible, terrible movie.

The story of the Tuskegee Airmen during World War II is an amazing one – only the way that it’s told in Red Tails makes it seem cliched and fictionalized. It doesn’t serve any justice for the real story hidden within this contrived one. More emphasis is placed on fictional subplots of romance and alcoholism than the non-fiction story at hand.

Lucas has been on a tirade lately, suggesting that if you don’t like Red Tails, you’re racist. But the way I see it is that the movie itself is highly racist on both sides. There’s only one white character in the whole movie that sides with the black pilots. The rest are all racist pigs. Then, on the flip side, the black characters are all stereotypically written. They could all be set in the times of slavery and no changes would need be made to them. There’s the bossy leader who’s trying to conform to the way of the white man, always coming across as subservient. There’s the always-angry one who wants to break free, go rogue and defy his leaders – white or black. There’s the uber-religious one who talks about nothing more than “Black Jesus.” They even went so far as to write in a black character like Bubba from Forrest Gump. His speech is always hard to hear because of his overly large bottom lip and he’s always playing his guitar and slapping his knee. Thing of any black stereotype and Red Tails reaffirms it.

Both of the leading two character have major flaws, they can’t be good men on their own right. It’s not a terrible thing that each has their flaws, but neither of them correct their issues by the end of the movie. When the closing credits roll, not a thing has changed. They haven’t learned anything or overcome a single interior problem – only the outward hurdle, white men.

The biggest of Lucas’ “contributions” is in the stylized way the movie looks. It doesn’t look like World War II, but The Phantom Menace – from the look of the jets and the battles, to the landscape and scenery. This movie appears to be set on Naboo, not Earth.

Even the dialog and performances sound like Star Wars. Our central characters even repeat lines from Star Wars, “Red One to Red Two,” and so on. Just like our X-Wing pilots, they yell out “woo-hoos,” “ahhh, yeahs” and one-liners from in-cockpit mid-flight camera shots.

If I was one of the surviving Tuskegee Airmen or the family of one, I’d be embarrassed by Red Tails. It bastardizes the true story, making Pearl Harbor look like Saving Private Ryan. The only good thing to come from it is that I now want to watch a lengthy documentary about the real Tuskegee Airmen.