Pirates of the Caribbean: Dead Men Tell No Tales

The ship hasn't completely sailed, but it sure could use a good swabbing. Made for hardcore 'Pirates' fans only.

Rated PG-13 for sequences of adventure violence, and some suggestive content. 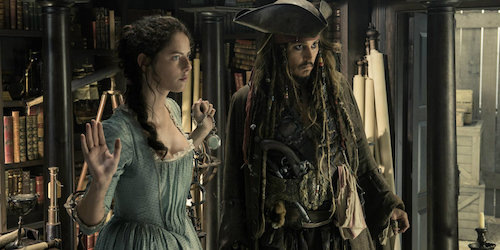 If there’s one thing the Pirates of the Caribbean movies have in common it’s excess. Even the  newest one — while being the shortest so far — is as bloated and convoluted as the rest. Disney was smart to bring in two talented seafaring directors with Joachim Rønning and Espen Sandberg after the far better Kon-Tiki, and at least they gave it a good shot. Unfortunately, it’s Jeff Nathanson’s screenplay that bogs down Dead Men Tell No Tales. With characters we barely care about, they squeeze in a few old, familiar faces just to remind us they were in previous movies — and to make sure they continue their royalty checks. Johnny Depp may be able to play Captain Jack Sparrow in his sleep, but it’s starting to look like he literally is.

Young Henry Turner (Lewis McGowan) has rowed out to sea, tied himself to a rock and jumped into the ocean. Lucky for him, his father, Will Turner (Orlando Bloom), is awaiting aboard the Flying Dutchman. Will is not excited to see his son, but Henry vows to save him from his curse. Nine years later, Henry (Brenton Thwaites) works aboard a British Royal Navy warship which is chasing a pirate ship. Henry realizes they are sailing into the Devil’s Triangle, but it’s too late. The undead attack — led by Captain Salazar (Javier Bardem) — and the crew of ghosts leave Henry to tell the tale for dead men tell no tales.

Now we’re introduced to Carina Smyth (Kaya Scodelario), accused of being a witch and always on the run from the law. Turns out, knowing too much about astronomy is means of witchcraft and she’s been sentenced to death. Before she knows it, fate steps in for Carina and Henry and they’re off in search for the Trident of Poseidon to save poor dad. Along the way, they stumble across Captain Jack in the midst of a bank robbery and then they’re all off on another adventure with Captain Barbosa (Geoffrey Rush) being forced into helping Salazar find Jack to kill him.

It may sound like faint praise considering the bombastic Dead Man’s Chest and At World’s End, but compared to the almost home video feel of On Stranger Tides, Dead Men Tell No Tales is definitely the best Pirates film since Curse of the Black Pearl. Directors Rønning and Sandberg at least try to give the film an epic feel, but even at a mere 129 minutes, it’s still a pretty big bore. Thwaites and Scodelario make a pretty good pairing, but they still only come across as Orlando/Keira Knightley Lite. And I already told you that Depp is sleepwalking his way through another episode of cash cow milking. At least he’s better here than he his return as the Mad Hatter in Alice Through the Looking Glass.

The effects are as top notch as always, which is where the film has the most credibility. Salazar’s spectral crew are the best part of the film. Super creepy. But not even a bout with zombie sharks was enough to leave me enthralled. As always, there’s way too much going on and Dead Men Tell No Tales is every bit as confusing as the last four entries. The series has never been the smartest of blockbusters, but audiences should be given a little more substance than CGI. Summer is off to a rickety start, hopefully things get better from here. I had high hopes for this year’s season, but this is not setting the bar off very high. The fact that there’s a post-credit scene only worries me as it inclines there are more adventures afoot. Guess we’ll have to see how the film does overseas. If the half empty free screening was any indication, we may be ready to see the series walk the plank.