The worst kind of sequel. Big, loud, and extremely dumb. The love child of 'Transformers' and 'Mighty Morphin Power Rangers.' Fans of the original should boycott. Made for fans of Michael Bay-style nonsense. 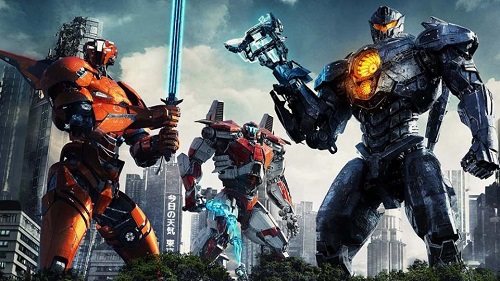 It’s been five years since Guillermo del Toro gave America Pacific Rim — the Kaiju/Jaeger medicine we didn’t know we were missing. Ever since, a sequel has been in the works off and on with Del Toro teasing his direction again. In the meantime, Legendary has moved from Warner Bros. to Universal and del Toro has gone on to win some long overdue Oscars.

Del Toro and company put a lot of faith in co-writer/director Steven S. DeKnight — of Spartacus and Daredevil notoriety — but it’s clear after having suffered through Pacific Rim: Uprising that only Del Toro knows what makes the world he and Travis Beacham built in the first film. All we want is robots punching monsters. And it takes 80 minutes to even get to a single Kaiju. That right there may tell you all you need when it comes to deciding whether to spend your money on this overdue, and undercooked, turkey of a sequel.

It’s been 10 years since the first film and Jake “Son of Stacker” Pentecost (John Boyega) brings the audience up to speed. In the film’s present, Jake is chasing after a jaeger capacitor but is beat to the punch by the scrappy young Amara Namani (Cailee Spaeny). Both wind up being taken into custody by the Pan Pacific Defense Corps (PPDC). Here, Mako Mori (Rinko Kikuchi) offers Jake the chance to escape jail time if he returns to the Shatterdome to train new recruits. Much to the chagrin of Nate Lambert (Scott “Real-Life Son of Clint” Eastwood), Jake, and Amara are off to training. Little do they know Dr. Newton Geiszler (Charlie Day) is developing an army of drone jaegers to keep the world — and their pilots — safe. Everyone is convinced the Kaiju will return and they must be ready at all costs.

For anyone who felt Del Toro’s Pacific Rim was bloated, you ain’t seen nothing yet. DeKnight should be ashamed for breaking the cardinal rule when it comes to sequels: more. Unfortunately, the only thing there is more of in Uprising are humans. You could call the film Exposition & One Liners: The Movie and you wouldn’t know the difference. It doesn’t help that all of the side characters are completely disposable and those who’ve returned are extremely annoying. It says a lot to the power of Boyega and Spaeny, they’re not bad, and even better when playing off each other. But most of the movie is clichéd action film machismo overload. Yes, Uprising has transformed the franchise into Transformers: explosions, swirling camera moves, slo-mo shots of characters jumping mid-air, reckless abandonment for collateral damage, and unexplainable snowball fights. I wish I was kidding.

Pacific Rim was not a box office smash, but a $411 million box office against a $190 million budget is a fair return. I was a bit obsessed with the first film — owning almost every single action figure, the comic book, the film itself on Blu-ray, 3D, and 4K, along with way too many posters including a wall-sized variant. So it saddens me greatly to see the series already diminished into the love child of Transformers and Power Rangers.

The film isn’t a complete bust. At least it’s bad enough to offer more giggles than most comedies. I felt like Statler and Waldorf making fun of the shenanigans as the trainwreck continued. But that’s not why one pays for a ticket to Pacific Rim: Uprising. We want robots fighting monsters and on that count, it fails miserably.