Once Upon a Deadpool

A mashup of old, new, and edited. Another studio experiment gone wrong. Made for only the most hardcore 'Deadpool' fans, but probably not since we enjoy our Deadpool R-rated. 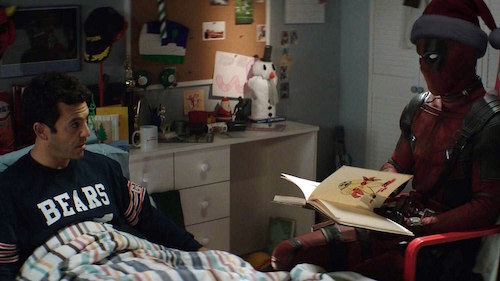 Deadpool does not work as PG-13. We knew that already, yet, here we are with Fox’s blatant cash grab Once Upon a Deadpool. Featuring absolutely nothing holiday related aside from its blistering marketing campaign, Deadpool 2.75 is simply a mashup of the original release, the “Super Duper $@%!#& Cut” included with the Blu-ray, new footage featuring Fred Savage, and edited versions of the original with all the cussing toned down and blood removed.

Everything new added in may be hysterical, but there’s nowhere near enough to warrant a quick theatrical re-release. And as projections indicate — it’s expected to bring in a mere $2.6 million this weekend — Fox’s plan to say there’s an audience for a PG-13 Deadpool universe have hopefully been squashed. This is, unsurprisingly, the most boring version of the film. At least the extended cut had new scenes help fill in some story gaps while adding more jokes along the way.

Here, you’re left yawning in between the new with huge stretches of nothing you haven’t seen before. And considering the film was originally released in May, your money is best spent elsewhere. Of course it’s going to be released on home video, same as the extended cut, and that’s exactly where it belongs. It may be fun for the fans to play a game of what’s new, but if you’ve seen the extended cut, only the Fred Savage stuff is new. And as hilarious as it may be, it’s nothing that couldn’t have been included as a third version for the video release.

Considering the wealth of fantastic family films in theaters this holiday season, it makes even less sense to be releasing this. Fox should ultimately be ashamed of themselves. Sorry Disney, fans don’t want their Deadpool watered down, and it would be a huge misstep to try and add him into the Marvel Cinematic Universe. Just let him be and continue milking the cash cow the way he was intended. Deadpool’s teets are far from dry, but only in the form of new material. With X-Force on its way, everyone is better off waiting it out for that and, of course, the eventual Deadpool 3. As for Once Upon a Deadpool, move along folks, there’s nothing to see here.