Poorly put together and almost made suffering through by the cool camera shots and unique sea life featured. Made for nature enthusiasts and people intrigued by seeing unseen creatures. 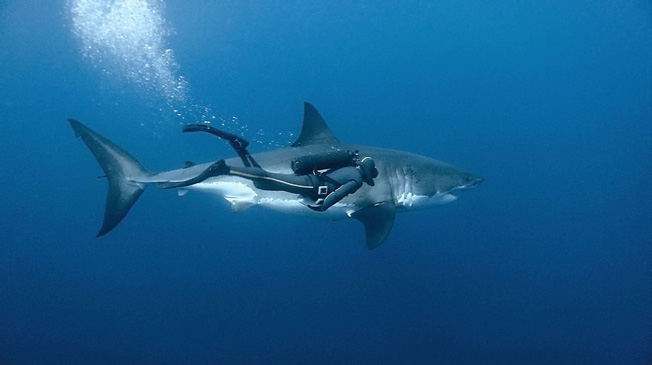 Oceans is the second part of Disney Nature’s ongoing series of Earth Day pictures. It began last year with Earth, an extended cut of the first episode of the Discover Channel’s Planet Earth series. Had Oceans been a rehash of Planet Earth’s oceanic footage, it would have been just as spectacular as Earth. But having a whole new film crew quickly trying to shoot new sea shots, Oceans ultimately lacks.

When Planet Earth premiered in the U.S. in 2006, it revolutionized nature documentaries. The footage was flawless. It was shot in the highest quality. New technologies were invented simply for this series. Learning how it was filmed was just as interesting as the series itself. Planet Earth upped the ante for documentaries of its kind, and the crew that made Oceans isn’t even close to matching their quality.

Oceans isn’t concise. It doesn’t flow smoothly. Instead of taking you on a journey exploring what lies between the surface and the ocean floor, it simply just shows you “stuff.” There are not defined sections. There is not a dolphin section, shark section, whale section, etc. It jumps around like a kid with ADHD. You will see dolphins for a few minutes, then some whales, then some dolphins again, followed by crabs, fish and more dolphins.

And as if the editing (or lack thereof) wasn’t jumbled enough, the voice-over narration by Pierce Brosnan (James Bond) is so poorly scripted it is offensive. The beginning narration talks about a curious child wondering what the ocean is. Shortly thereafter it explains theoretical evolutionary beliefs as if they are fact, saying man is evolved from a creature that crawled out of the ocean millions of years ago.

Often times the narration never gives you what you want. Tell you about something they never show and never talk about the things you want to know about. For example, the narration will say, “Look at this fish as it does…” – yet we never see that fish do the thing they talk about! Or they will show an uncommon creature that is rarely captured on video and never tell you about it.

But the worst part about the narration is how hard it pounds you over the head with its message. The seas are polluted, we get it. We don’t need to be bullied around by manipulative shots and voice-over. The final line of narration in film says something like, “And now you know the ocean. (As if we learned all there is to learn in an hour and a half). If you want to know more, maybe you should ask yourself who you are.” What does that even mean? The vague ramblings of Mr. Brosnan almost make this film unbearable. Luckily, some of the shots they capture make up for that.

Two-thirds of Oceans’ footage is failed attempts at recreating Planet Earth shots. But one-third of it is well worth seeing, showing you things you have probably never seen before – like thousands of crabs marching sideways towards an epic battle with another species of crab; like massive fishing boats and military ships repeatedly riding up and down mountain-sized waves in the middle of the ocean during violent storms; like a diver swimming along side a great white shark or humpback whale. Those shots alone are the things that make Oceans worth watching.

If you are a die-hard fan of nature documentaries, then you will probably love Oceans. If you are a nature enthusiast or care about oceanic cause, then see Oceans opening weekend to contribute to the amount Disney is putting towards rebuilding the coral reefs. If you are neither, then don’t rush out to see it. Oceans isn’t spectacular and it is poorly put together. Check out Planet Earth or wait until Oceans is on home video.