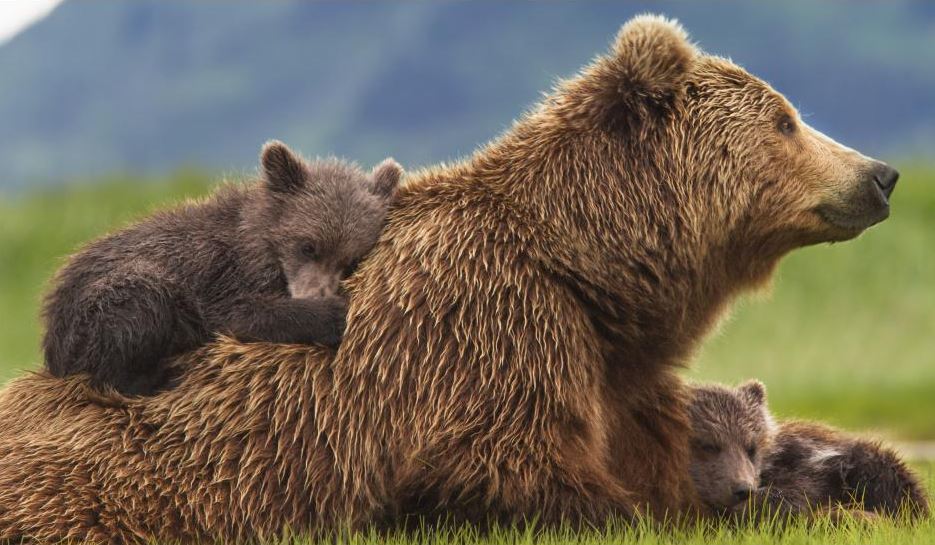 The Disney Nature series has a very certain purpose. This isn’t like the all-encompassing, epic scope nature documentaries produced by the BBC. No, these documentaries are geared toward families with young children. A way for children to easily empathize with wildlife without witnessing the gorier aspects of the animal kingdom. As with past Disney Nature docs, Bears is about an animal family just trying to survive in this cruel world.

In an effort to anthropomorphize the family of bears as much as possible, they’re given names, traits and even a few lines of hackneyed dialogue. Sky is the mama bear. She has two cubs, Scout and Amber. They’re grizzly bears, living in the remote nature preserves of Alaska. Sky has given birth to her two cubs over the winter, but it’s spring now and they’ve got to find food. When you boil it down, Bears is all about the search for food. A year in the life of a bear family, trying desperately to find enough food to keep them going until they can find their next meal. Amidst the constant threat of starvation they also have to deal with sneaky wolves and angry alpha male bears, both of which are also hungry and wouldn’t mind eating a bear cub or two.

Where documentaries like that of Planet Earth show an unfiltered vision of nature, these Disney documentaries shield younger viewers from the harsh realities of life in the animal kingdom. So, if you’re planning on taking your children, you don’t have to worry about them witnessing bloodied confrontations, and other animals being ripped limb from limb. That said, the poor salmon don’t get off nearly as easy. There’s plenty of salmon carnage to go around.

Actor John C. Reilly (Wreck-it Ralph) narrates the proceedings. He’s a decent enough narrator, although some of the tasks he’s given are ridiculously hammy. American kid-centric movies are uncomfortable with silence, so many of the slower spots are filled with inane dialogue that Reilly is asked to metaphorically put into the mouths of the bears. When Scout falls behind he yells, “Hey, mom! Wait up!” He’s asked to speculate on each bear’s feelings, and what they must be thinking at that exact moment. It gets tiresome. Why not just let the beauty of nature speak for itself? The anthropomorphizing of Sky and her cubs gets out of hand and is never quite reined in by the time the film ends.

On the bright side, the visuals here are stunning, a vast expanse of untouched wilderness featuring snow-capped peaks, lush flowering meadows, muddy shores, crystal clear rivers, ponds bubbling with excited salmon, blue skies, and of course the majestic bears themselves. The film crew has done a masterful job at capturing the visuals needed to tell the story they want to tell.

“Bears” is at the top of its game when it’s focusing on the spectacular Alaskan wilderness. It’s so beautiful and pristine that whenever Reilly perks up with some silly quote or statement, you almost get angry. It’s akin to being outside in a tranquil spot of nature and having it ruined by a group of rowdy, inconsiderate people unaware of the raw splendor they could be witnessing.