Pulpy noir as only Del Toro could deliver. Made for Del Toro fanatics and adults looking for something more in line with awards season. 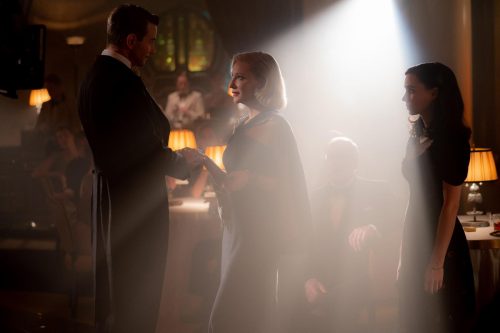 When it comes to world building, Guillermo del Toro has always been one of the best. Even from the beginning, Cronos was a vampire film that felt based in a reality you could step into. From there, he only got better. Even when adapting comic books — see Blade II and his two Hellboy films — he found ways to take an already established property, expand it, and make it totally his own. Now, he’s set his sights on remaking the 1947 Tyrone Power-starring noir, Nightmare Alley — based on the William Lindsay Gresham novel — filled with spectacular performances, an atmospheric score, and amazing cinematography.

Stanton Carlisle (Bradley Cooper) is fresh off the train and finds his way into working in a traveling carnival. When he’s not wooing Molly (Rooney Mara), he’s spending time with the mentalists Zeena the Seer (Toni Collette) and whino Pete (David Strathairn). Slowly but surely, Stanton begins to learn the tricks of the trade and convinces Molly to leave with him to start a new life. Soon, the pair are rubbing elbows and hustling the rich, leading Stanton to cross paths with Dr. Lilith Ritter (Cate Blanchett). Lilith and Stanton are soon in cahoots and start working on Ezra Grindle (Richard Jenkins), but fate always finds a way and ulterior motives may be at play.

Ladies and gentlemen, step up right and see the show of shows! While the pacing may not be for everyone — you do start to feel the 150-minute runtime before it’s over — sometimes it’s more about the journey than the destination. And when you’re watching a Del Toro film, the journey is the best part. Cooper gives a performance you’d expect from him and continues to prove he’s still leading man material. But this is very much an ensemble piece and everyone gets a few chances to shine. Composer Nathan Johnson and cinematographer Dan Laustsen work magic together, with editor Cameron McLaughlin making sure everything fits together.

Del Toro’s screenplay — with co-writer Kim Morgan — plays up the noir aspects and keeps the mystery unfolding amongst the shadows. Had the film played a bit faster, the ending may have had a bigger impact, it still lands exactly how it should, and is not quite the same as the original film’s. I can’t help but think this is how the novel ends, but back in 1947, movies were basically required to have a happy ending. Considering Nightmare Alley has managed to snag some nominations amongst our Utah Film Critics Association, it won’t be any surprise to see it grab some Oscar love as well. Del Toro has crafted a feast of a film for noir junkies, something rarely provided these days. For the more adventurous filmgoer, Del Toro fanatic, and those with patience, Nightmare Alley is a mesmerizing slowburn you won’t want to miss.