Never as good as it could have been, and never as bad as the series has been, but at least it's rated R! Made for fans of the franchise and action junkies.

Rated R for strong bloody violence and language throughout, and some crude references. 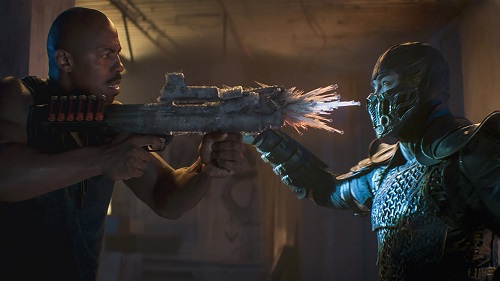 Growing up in the ’80s, the Circle K up the street was the best hangout spot.  This local convenience store sucked our quarters dry. While I don’t remember playing Mortal Kombat there, it did have Street Fighter. My exposure to Mortal Kombat itself may have been more through pop culture than actually playing the game.

Even today, I have limited exposure to the previous films: Paul W.S. Anderson’s 1995 cult classic and, earlier this week, I managed to get through about 20 mins of the abominable sequel, Annihilation, on HBO Max. And speaking of the streaming service, it may be the best place for casually interested viewers of director Simon McQuoid’s Mortal Kombat fanservice. For those who fit this bill, you’ll drink this milkshake up and love every minute of it.

1617 Japan, Bi-Han/Sub-Zero (Joe Taslim) has slaughtered everyone at the Hanzo Hasashi (Hiroyuki Sanada) compound aside from Hanzo’s infant daughter who is rescued by Lord Raiden (Tadanobu Asano). In the present day, we are told that the Outerworld realm is only one “Mortal Kombat” victory away from being able to take over Earthrealm.

As simple as the plot may seem, that’s a lot of characters to keep track of for any film. Thankfully, they’re separated in two distinct groups until eventually paired up in the expected gory fisticuffs. Same as Godzilla vs. Kong, no one is watching Mortal Kombat for plot. And anyone expecting some plot will already have way more background knowledge of the game’s universe to help it make sense and won’t need a scorecard. Regardless, Warner Bros. is clearly praying to make money and kick start a franchise as it ends quite abruptly, and anticlimactically, on a cliffhanger.

The tone zigs and zags from playing things straight to tongue-in-cheek within the same scene, with some needlessly obnoxious characterization. Kano especially feels like a leftover stereotype from ’80s action cliches: misogynistic, homophobic, egotistical, etc. As fun as the trailers have been, the film doesn’t live up to the hype for the non-initiated. While the fatalities may finally be experienced on the big screen the way they were designed, the film runs as cold as Sub-Zero’s veins.

McQuoid — along with screenwriters Greg Russo and Dave Callaham — fill the screen time with eye-rolling one-liners, and fan-favorite dialogue, lifted straight from the games, while splashing the cast in as much CG-enhanced gore as possible. McQuoid has stated that they walked right up to the line of NC-17, but honestly, there’s nothing here we haven’t already seen before, including a particular fatality just recently used in Freaky to greater effect. In terms of special effects, some of the CG is fairly questionable, Goro in particular looks like he wandered onset out of the computers used to create Warcraft.

I was hoping Mortal Kombat would be more stylish, but the action in the just-released trailer for Marvel’s Shang-Chi is edited better than the fast-cut techniques employed here. While far from the worst video game adaptation, there’s still room for improvement. Just two days ago, WB released the first seven minutes, and it’s single-handedly the best directed/edited fight in the entire film. For fans of the series, a trip to the multiplex may be in order — it certainly sounded spectacular in IMAX — as for the rest of us, HBO Max will more than suffice.