A typical chick flick made likeable by genuine characters and little honest moments. Made for chicks. 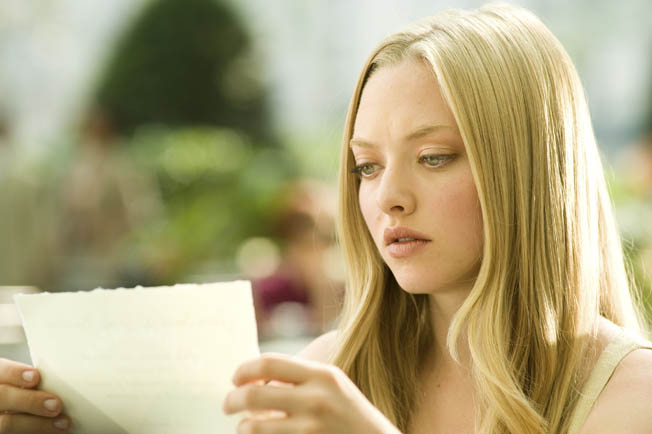 Supposedly, in Verona, Italy – the hometown of fiction Shakespearean
characters Romeo and Juliet – there is a small tourist attraction that
is believed to be the Capulet home. The wall below the Juliet’s balcony
is a sanctuary for girls dealing with man-troubles. Suffering girls
gather there, write down their emotions, problems and feelings and tape
them to the wall for Juliet to read. Little do these grieving women know
that city of Verona has hired a wise, aged group of well-experienced
women, known as “Juliet’s Secretaries,” to collect the letters daily and
respond to them individually.

Amanda Seyfried (Dear John) plays the lead character
in this fairytale, an aspiring journalist named Sophie. Considering how
busy both she and her fiancée (Gael Garcia Bernal, The Science Of Sleep) are just prior
to the grand opening of his New York City Italian restaurant, they
decide to take a pre-marriage honeymoon to Italy where he can also study
the food and flavors.

In the middle of their food-filled
travels, the two decide to split up for a few days in order to enjoy
their own different sights – Sophie’s being the romantic and her
fiancée’s being food related. When Sophie visits Juliet’s balcony, she
learns of “Juliet’s Secretaries.” Taking advantage of a good opportunity
to tell an untold story, Sophie spends her time with the Secretaries.

While
collecting the letters one afternoon, Sophie discovers a loose rock in
the balcony wall and removes it, revealing a 53-year-old letter written
to Juliet. Feeling inspired, Sophie writes Juliet’s response letter,
hoping that the writer is still alive. Just a few days later, the
68-year-old author of the letter (Vanessa Redgrave, Mission: Impossible) arrives in
Verona on a mission to find her lost love from 53 years prior. Of
course, she brings her strapping man-boy grandson who draws the
attention of Sophie’s heart. Together, the three of them head out on a
journey through Italy’s beautiful countryside to find the man she loved.

As
unoriginal as Letters To Juliet
may be, the charisma, charm and honesty of the characters makes it an
enjoyable romantic comedy. The romance story is fun and playful, but the
unforeseeable story about Redgrave and her “Romeo” is heartfelt.
Because the twists of the story are obvious and cliché, the film takes
itself lightly, even poking fun at its own faults and corny flaws.

I
cannot think of a single female that would not enjoy Letters To Juliet. Guys on dates and
those who don’t mind any occasional chick flick won’t hate it either. Letters To Juliet is sweet, kind and
even pretty funny at times.