While not quite living up to the height of Wright, it's still a bloody good time if you allow yourself to stick with it through the end. Made for Edgar Wright fans or those looking for something a little more thinking in their horror. 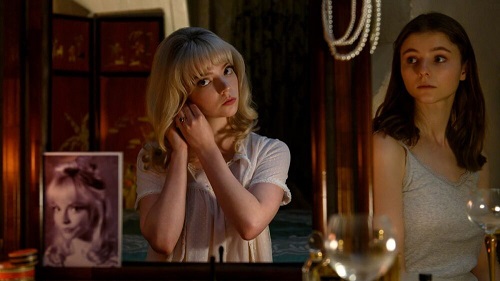 No filmmaker is infallible. There comes a time when one of our favorites finally produces something mediocre. Some may say Edgar Wright hit that note with The World’s End, but for what it was — an alien invasion film — it was every bit as brilliant as the rest of the “Cornetto Trilogy.” After showing his love for giallos in Hot Fuzz, it was only a matter of time before he tried making one of his own. Unfortunately, Last Night in Soho doesn’t completely live up to its inspirations, but it does have plenty of genius moments sprinkled throughout, before the twist arrives to save the day.

Eloise (Thomasin McKenzie) aspires to be a fashion icon. Mousy and quiet, she’s the anti-Cruella when she arrives in London, after being accepted to the London College of Fashion. Eloise quickly learns that London is not the swinging-’60s she dreamed it would be and moves out of student housing to an upstairs flat belonging to Ms. Collins (Diana Rigg). Here, she starts having dreams where she is transported to the London of old, and inhibits the life of Sandie (Anya Taylor-Joy). Sandie also has big dreams of a career as a singer, and is swiftly under the tutelage of Jack (Matt Smith) as her manager. But as with Eloise, things aren’t what they seem, and Eloise’s nightly dreams start to bleed into reality, with all signs pointing to murder.

You can usually count on Wright to make impeccably made films, but with Last Night in Soho, a lot of runtime will leave viewers a little cold. The soundtrack helps envelope the appropriate mood, with some of the best song choices this side of a Quentin Tarantino film. He also manages to pack in a lot of amazing camera tricks that, knowing Wright, were probably pulled off in camera. A dance sequence involving McKenzie, Taylor-Joy, and Smith is a doozy — and a showstopper. The cast are obviously having a wonderful time playing in Wright’s sandbox, but until the mystery finally starts to reveal itself, also seem to be going through the motions. McKenzie manages to turn in a tour de force by the end, while Rigg steals every scene. While it may not be intense, it is a bloody good time once the pieces start to come together. Even a less-than-stellar Wright project is still better than most.