Can the series still be spun in a new, wild direction? You bet Jurassican! Made for 'Jurassic' fans and anyone looking for the new big popcorn blockbuster. 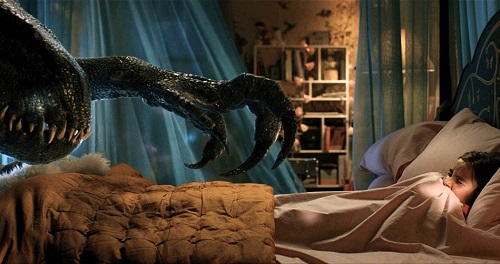 Three years ago, Jurassic World rebooted the Jurassic Park franchise. The world was obviously dino hungry, with JW chomping up more than $1.6 billion worldwide. Considering Jurassic Park celebrated its 25th anniversary just last week, it’s surprising Jurassic World: Fallen Kingdom is only the fifth installment. Now, J.A. Bayona (The Orphanage, The Impossible, A Monster Calls) takes the reins, proving life finds a way to keep the series alive and well. And while you can’t help but feel the nostalgia again, at least Bayona — with returning writers Colin Trevorrow (director of JW) and Derek Connolly — is trying to expand the Jurassic universe and take it in a fun, new — and bonkers — direction.

Three years after the fall of Jurassic World, an Indominus rex sample is secured from the bottom of the Mosasaurus compound. Congress is in a heated debate over dinosaur rights. Claire (Bryce Dallas Howard) is running the Dinosaur Protection Group where she’s contacted by Benjamin Lockwood (James Cromwell). At Lockwood’s estate, she meets with him and his assistant Eli Mills (Rafe Spall). The two convince her to help them rescue dinosaurs from Isla Nublar before the dormant volcano, Mt. Sibo, erupts. They need Blue in particular and enlist Owen (Chris Pratt). Soon enough, ulterior motives come to light, the volcano obliterates the island, and everyone is in more danger than ever before back at Lockwood Estates.

At one point, Claire asks Owen, “Do you remember the first time you saw a dinosaur?” It hits home in a way you’d never expect. Fallen Kingdom is full of scenes that harken back to the original, even more so than the first Jurassic World did. It takes you by surprise and makes you wonder how a movie about cloned dinosaurs can make you misty eyed. It also has spectacular action scenes filled with just as much beauty courtesy cinematographer Óscar Faura. Maestro Michael Giacchino spares no expense in the score department, making sure this one isn’t just a repeat of the last four films.

Bayona and his writers have ensured a rollercoaster of a good time. Unfortunately, there are some moments — including the entire second half of the film — they should have kept under wraps. Anyone who watches the trailers/TV spots could easily piece together the whole plot if they wanted to. It also undercuts what should have been surprise twists and almost ruined some huge money shots. At least the new Indoraptor is one of the best Jurassic villains, I just wish it had gotten more screen time.

As for the cast, Pratt has honed in his Owen and rounded out some of his edges while he still has great chemistry with Howard. And Claire’s DPG teammates — Zia and Franklin (Daniella Pineda and Justice Smith) — are awesome additions to potential dino chum. Goldblum’s cameo is nothing more than that. Isabella Sermon — as Lockwood’s granddaughter Maisie — is the perfect Amblin youth-in-peril. B.D. Wong continues to be strung along as a grandmaster, and Ted Levine gets to have some smarmy fun as a mercenary in charge of the Isla Nublar expedition. Toby Jones even shows up in a small, but appropriately oily guest role.

Having already grossed almost $500 million in the last couple weeks overseas, I’m pleased audiences are finding Jurassic World: Fallen Kingdom to be the huge crowd pleaser it sets out to be. It’s the epitome of summer popcorn tentpole. For some, that may sound like a turnoff. For the rest of us, sit down and hold onto your butts!