Super fun, but super dumb. So, ya know, a big summer popcorn movie, heavy on the corn. Made for die hard fans who can accept the inevitable: the series has gone prehistorically bananas.

Rated PG-13 for intense sequences of action, some violence and language. 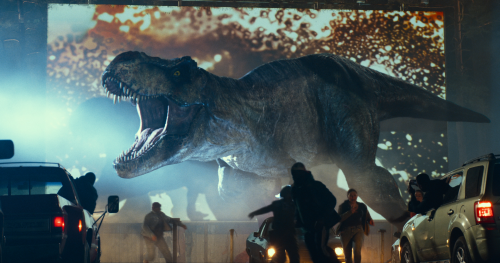 I doubt any review this year will pain me more than to not give Jurassic World Dominion five stars. While it may heartily deliver what we want — dinosaur action — Dominion skimps on the brains even more than either of the last two Jurassic Worlds. Never as shoddy as Jurassic Park III, this two and a half hour finale deserved at least another script polish or two.

The action scenes may be top notch, and the CGI is spectacular as always, but this time, director Colin Trevorrow — along with co-writer Derek Connolly — really dropped the ball attempting to make it make sense. That being said, there’s still plenty of reason for us to hold on to our butts and bask in some good old fashioned summer blockbuster cheese.

It’s been four years since the disaster at the Lockwood estate. Dinosaurs now live free throughout the world, encroaching on our safety. Owen (Chris Pratt) and Claire (Bryce Dallas Howard) have escaped to isolation in order to keep Maisie (Isabelle Sermon) safe. One day, a baby raptor — which Maisie names Beta — wanders onto their property, quickly bringing along its mother, Blue, and some poachers.

Now, Maisie has been kidnapped and is being taken to Biosyn Genetics, where Dr. Wu (BD Wong) thinks she may hold the genetic key to saving millions of lives. Meanwhile, killer locusts have started taking over the world’s crops, leading to the possibility of a complete ecological collapse. Thankfully, now-divorced Ellie Sattler (Laura Dern) is on the case, and convinces Alan Grant (Sam Neill) to tag along, leading them directly to Ian Malcolm (Jeff Goldblum) who may be the biggest piece of the puzzle.

There are a lot of missed opportunities at play throughout Dominion. Giving Maisie an identity crisis is great for a character arc, but the fact that she is basically kidnapped makes for unintentional irony that they’re trying to save her after being kidnapped. And giving Wu a redemption arc could have been handled better considering it solely rests on the fact that the “mistake” he created are the locusts and not, I don’t know, the dinosaurs from the very beginning?

It’s also odd that never once is conflict introduced concerning Dodgson being the reason everything happens in the first film. This could have made him a much better antagonist rather than relying on the brilliant man-child syndrome trope. They also forgot the worry that came from Fallen Kingdom surrounding others being able to create their own dinosaurs after selling them off, let alone Maisie setting them loose.

OK, so I know that sounds like an awful lot of complaining, but remember, I came here for the dinos first. And on that front, Trevorrow provides a cornucopia of dino mayhem. The new dinos are super fun — especially the Freddy Krueger-esque Therizinosaurus — with the Giganotosaurus finally making an appearance.

I would say they were possibly saving the best for last, but there’s no way this is going to be the last. It ties things up for itself, but in no way does it ever actually feel like any kind of trilogy. Trevorrow has said that they approached this as Jurassic Park 6, and he’s not wrong. It’s fantastic having our original trio back. Dern, Neill, and Goldblum all fall right into place, and surprisingly fit right in alongside Owen, Clair, and Maisie.

The best addition to the franchise, however, is Wise’s Kayla, thanks to Wise lifting the character far above how she’s written. What could have been a standard throwaway character honestly deserves her own spinoff. Cole also takes his opportunity to run with a pretty stock character.

If there’s anyone who doesn’t fit in anymore, it’s Wu. After turning him into a villain through the first two World films, he does not deserve the redemption arc. It’s also nice having Smith and Pineda back, but Jake Johnson would have been better. The man can make any line of dialogue hilarious and would have been a welcome return.

After everything from COVID shutdowns to location moves, Jurassic World Dominion does what it can, but feels oddly scattershot with the action being so global. I know they wanted to finally make this a jurassic “world,” but it gets exhausting trying to keep track of all the details. The one sequence that feels particularly out of place is when they wind up in Malta and the film turns into a James Bond escapade. Once they finally get the converging plots centered, it picks back up considerably.

Dinosaurs reign supreme throughout Dominion, so while this may not be the finale everyone was hoping it would be, to quote our dearly departed Mr. Arnold, “It could’ve been worse, John. A lot worse.”