Not quite worth a trip to the local theater in the current atmosphere, but worth every penny on Disney+ to stay home and enjoy the ride. Made for families looking for some fun adventure at home. 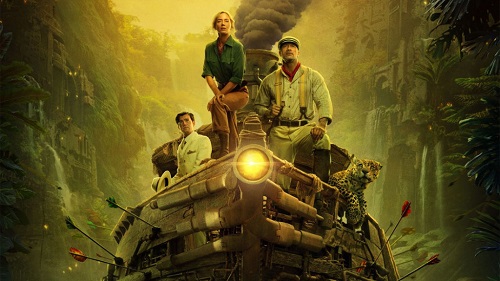 While Disney continues to wring every last drop out of their prequels and remakes, let’s not forget that they’ve also tried their hand at adapting their Disney park rides into movies as well. Surprisingly — and thankfully — there have not been very many. While the only true blockbusters wound up being the progressively bad Pirates of the Caribbean franchise, there was also The Country Bears, The Haunted Mansion, Tomorrowland, and Mission to Mars. So, if you were going to pitch a movie for the corny, pun-filled “Jungle Cruise,” you better have something pretty great to extend beyond the mere 15 minute boat ride.

To its advantage, director Jaume Collet-Serra — with writers Michael Green, Glenn Ficarra, and John Requa — gets the ride connection out of the way before the title card even appears. And lucky for us, Dwayne Johnson and Emily Blunt are our trusty skippers. Weaving their way through misadventures with plenty of banter and chemistry — no matter how shoehorned it may be — settling on a clichéd summer adventure template to get from point A to point B with plenty of entertainment along the way.

Blunt stars as Lily Houghton, a scientist who could be friends with Indiana Jones. All she wants is to find the “Tree of Life,” said to possess healing powers that could change the history of medicine forever. Frank Wolff (Johnson) is a skipper with a fleeting boat tour. Through happenstance — mainly a jaguar attack and the arrival of Prince Joachim (Jesse Plemons) — the two are brought together and whisked away on a journey to discover more than just a mysterious fountain of youth. That is, unless Joachim can find it first, with the help of a troupe of centuries-cursed Conquistadors — including the vengeful Aguirre (Edgar Ramirez).

It came as no surprise when it was announced that Disney was turning yet another park ride into a feature film. But the real surprise came in the form of the director and writers. Helming from a mostly horror background — while also dabbling in action more recently — you’ve probably seen Collet-Serra’s House of Wax, Orphan, Unknown, Non-Stop, Run All Night, or The Shallows. While The Shallows may be the closest he’s ever had to a true classic, he does know how to keep the thrills coming.

On the writing side, he’s working with a team who knows how to do action, drama, and comedy. Green has had his hand in everything: Sex and City, Smallville, Heroes, Green Lantern, Logan, Alien: Covenant, and Blade Runner 2049. While Ficcara and Requa run the gamit with Cats & Dogs, Bad Santa,  I Love You Phillip Morris, Crazy, Stupid, Love., Focus, and This Is Us. It may look like the three could result in a kitchen sink effect, and to some extent they do, but it helps keep things moving briskly. Although I’m still not sure who thought the extraordinarily forced love story was necessary and I’m surprised all parties didn’t decide against it.

Stealing its tone from the Pirates franchise — and Brendan Fraser Mummy films — Jungle Cruise is a quick sailing adventure with a splash of swashbuckling. It never rises above turn-your-brain-off fun, but when you’re watching a movie based on a pun-filled boat ride at the Disney parks, what more can you expect? Thankfully, the cast are in on the joke and know how ridiculous it all is, even if there are some silly serious tidbits and the unnecessary romance. When all is said and done, your best bet is to just strap yourself in and enjoy the ride. If you’ve seen the trailer, you know what to expect. And there’s far worse ways to spend your time either in a theater, or at home on Disney+ Premiere Access for $29.99.