Rated PG-13 for sequences of violence and action, some bloody images, language and thematic elements. 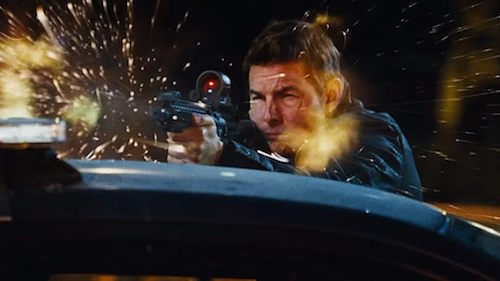 With an ever changing clique of directors, Tom Cruise has gotten a lot of mileage out of his Mission: Impossible franchise. With each new entry, they’ve all managed to make an even better film than the last — with the exception of Christopher McQuarrie’s Rogue Nation because let’s face it, they’re gonna have to really knock it out of the park to best Brad Bird’s Ghost Protocol.

Sadly, that isn’t the case with Cruise’s second installment of Lee Child’s Jack Reacher series, Never Go Back. As unusual casting choice Cruise was to begin with, the same thing could be said of director Edward Zwick. While having directed Cruise before — The Last Samurai — he’s never managed to make a top notch film. It doesn’t help that his resume is all over the map. And even his best films, Glory and Legends of the Fall, are now 27 and 22 years old. His lackadaisical approach encroaches every frame of Never Go Back, always keeping any kind of excitement from finally kicking into high gear. Not something fans of the first film will find endearing.

I can’t help but think that Zwick is trying to stay truer to character, but this Jack Reacher is a complete bore from start to finish. Sure, Zwick gives Cruise plenty of chances to take off on one of his prerequisite jaunts, but costar Cobie Smulders is never able to keep up. Smulders still has yet to find a role that she can conquer and continues to be just another version of everyone’s favorite TV Canadian, Robin Scherbatsky.

Everyone is hindered by Zwick’s lackluster direction, which he is solely responsible for considering he co-wrote the screenplay — along with Marshall Herskovitz (who also contributed to Zwick’s Samurai and Love & Other Drugs) — leaving no room for blame. Richard Wenk (The Magnificent Seven, The Equalizer, Expendables 2) was probably brought in by Cruise to punch up the screenplay, but all we get is Cruise literally doing way more punching than usual. The plot is a complete throwaway with Smulders’s Major Turner simply along for the ride while Reacher tries to keep her — and an is-she-or-isn’t-she 15-year-old daughter (Danika Yarosh) — out of harm’s way.

Zwick has made one of the most boring and lifeless action sequels possibly ever. While other franchises ramp up the fun, action, and ridiculousness with each chapter, Never Go Back stutters and faults right out of the gate. It’s all coincidence and chance here, leaving Reacher’s Batman-esque detective skills deduced down to simply putting two and two together at the last second. This Jack Reacher may leave it open for more sequels — surprisingly considering this film was made simply on the amount of money raked in overseas to the tune of $138 million while barely making $80 stateside — but Cruise would do well to ditch Zwick now and Never Go Back.