It Comes at Night

Completely falls apart in the end when you learn the film's title isn't the only misleading part of the marketing and that the director loves gimmicks. Made for fans of slow burn horror features that rely more on what's behind a door or lurking in the shadows than blood and guts. 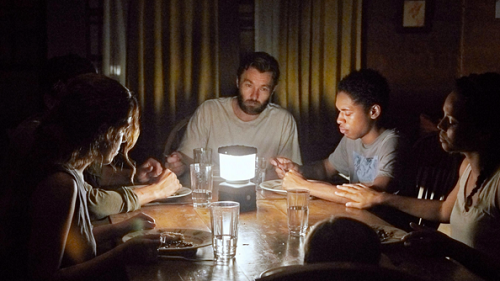 When it comes to horror, what you don’t see is usually scarier than what you do. But what if what you don’t see never existed in the first place? If that sounds off putting, make sure you steer clear of It Comes at Night. Following in the footsteps of overrated horror offerings like It Follows, It Comes at Night writer/director Trey Edward Shults puts on a smoke and mirrors act. Relying on horror tropes, Shults merely tries to pull the wool over your eyes in the finale with a lame gimmick he mistakes for metaphor and then cuts to credits.

Deep in the woods, a family of three — Paul (Joel Edgerton), his wife Sarah (Carmen Ejogo), and son Travis (Kelvin Harrison Jr.) — hiding from the dystopian, disease-infested world around them. Something is outside trying to get in, or at least that’s what Paul wants everyone to believe. And one day, something finally does in the form of Will (Christopher Abbott) who claims to have broken in looking for provisions for his own family. Paul needs to know if Will is telling the truth so Paul and Will bring his wife Kim (Riley Keough) and their child Andrew (Griffin Robert Faulkner) to the home in the woods. Now, they’re about to all learn that sometimes it’s not what’s outside that you should be afraid of.

Anyone paying attention to the aspect ratio will be sorely disappointed by the time the film ends. Shults thinks his movie is smarter than it is while falling prey to the worst case of misadvertising ever. Without diving into huge spoilers, the title is incredibly misleading. So too is the marketing campaign. I’m sure you can guess what that means.

I have to give Shults credit for trying. For 80 minutes the film puts audiences through the wringer. It’s just too bad the Hollywood machine has gotten so bad with endings lately. The cast is solid, with Edgerton leading the way through a frenzied nightmare scenario. But nothing makes up for the sour taste the climax leaves in your mouth. The studio should have just released the first 80 minutes as a stand alone movie or encouraged Shults to keep going. Unfortunately, It Comes at Night never lives up to the hype.