Funnier than the first film, even if just as flimsy storywise, but definitely worth your streaming time. Made for fans of the original and those looking for something hilariously bewitching.

Rated PG for action, macabre/suggestive humor and some language. 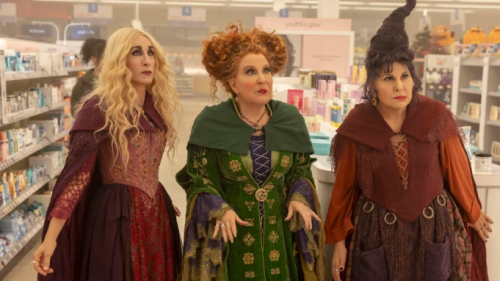 A summer oddity upon release, Disney’s Hocus Pocus has basically been an annual Halloween institution since its home video release. I may not have the same nostalgia for it as most, but even I have played my part, dressing up as Sarah Jessica Parker’s Sarah Sanderson for a work costume contest.

While Hocus Pocus 2 isn’t hitting theaters, it is streaming on Disney+ so at least you won’t have to venture out, or be stuck waiting for it to finally hit the platform. Twenty-nine years may be a long time for a sequel to finally come hither, but now it’s time to gather the virgins and light the black flame, because the witches are back — and funnier than ever.

In 1653, Salem, Massachusetts, we find young Winifred (Taylor Henderson) turning 16 and being forced to consider marriage. Along with her sisters, Mary (Nina Kitchen) and Sarah (Juju Journey Brener), they retreat to the woods where they meet a witch (Hannah Waddingham) and discover their true calling. In the present, Becca (Whitney Peak) is facing her own 16th birthday and just wants to celebrate in the woods with her best friend Izzy (Belissa Escobedo).

Unfortunately, the black candle replica Becca bought from Gilbert (Sam Richardson) — who runs the local magic shop — turns out to be real and now the Sanderson Sisters — Winifred (Bette Midler), Mary (Kathy Najimy), and Sarah (Sarah Jessica Parker) — have returned again to finish what they started, trying to cast the ultimate spell for ultimate power.

Director Anne Fletcher steps into the director spot, replacing Kenny Ortega from the original, as a good fit to keep things as family friendly as possible. Jen D’Angelo’s screenplay updates the humor for a modern audience while finding plenty of callbacks to the first film. As fantastic as the payoff may be when it comes to Mary’s Roombas, there is one super meta joke that makes absolutely zero sense and manages to take you out of the movie. It’s also interesting that one of the side characters winds up with the strongest character arc.

Things click along at a frantic pace with a fantastic youth cast, wholly making up for the cardboard cutouts from the first film. And our dubious trio of witches never lose a beat — even Parker’s Sarah is less annoying this time. Available to stream on Disney+, Hocus Pocus 2 is bound to be a new annual favorite, especially when it can be watched back-to-back with the original. While in no way any kind of new classic, Hocus Pocus 2 is plenty bewitching.