Hilarity ensues and director Michael Landon even manages to throw in even more heart this time around. Made for fans of the original or those looking for something that hilariously breaks it's own formula. 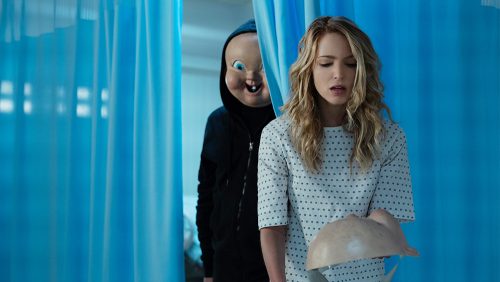 Considering how lame PG-13 horror has become, Happy Death Day felt like a blast of fresh air and brought in a ton of money. It’s no surprise a sequel has come and thankfully, director Christopher “Son of Michael” Landon returns to keep the tone mostly the same. With Happy Death Day 2U, Landon trails down a new path and introduces a heavy dose of time travel a la Back to the Future. So while poor Tree (Jessica Rothe) may have escaped her deadly Groundhog Day loop, a new wrinkle rears its head and pits her against a whole new twist of fate.

Tree has survived her murderous birthday, but now Carter’s (Israel Broussard) roommate Ryan (Phi Vu) is having his own deja vu. After his time travel thesis project is shut down by the Dean (Steve Zissis), Ryan gets murdered by our favorite baby-faced killer. Thankfully, Tree is around to explain what happened to her and Ryan fesses up that his project was what caused her own time loop.

And just wouldn’t you know it, the Dean storms in to shut down the project, this time sending Tree back to the future (her birthday), stuck in a parallel universe where nothing is the same. Here, this version of Carter is dating Tree’s sorority sister Danielle (Rachel Matthews) and her mom (Missy Yager) is alive and well. Now, Tree must decide if she wants to stay in a reality she has no memory of or say goodbye to her mom to be with the man she loves with the help of Carter, Ryan, and Ryan’s fellow science geeks Samar (Suraj Sharma) and Dre (Sarah Yarkin). All with a whole new killer hot on their tail!

Landon manages to score yet again with Happy Death Day 2U. Armed with a bigger tale, which surprisingly answers some questions from the first, it’s every bit as fun. Rothe continues to lead the films and has tons of fun. The best bits come from finding ways to make suicide as hilarious as Bill Murray did in Groundhog Day. And it should come as no surprise to anyone who’s seen the first film that Tree has never even heard of Back to the Future, something that could go a long way to saving her own life. Not a whole lot has changed, but it is nice to spend some time developing new characters (Samar and Dre), while getting to know Ryan better.

It’s not a spoiler to say Landon has already announced a third film — I can’t wait to hear its title — and it’ll be interesting to see where he takes the franchise from here. Considering he’s already tackled both slasher flicks and time travel, he can probably do pretty much whatever he wants. I guess so long as audiences show up again. And they should, Happy Death Day 2U is a fun ride keeping the audience guessing, all while providing characters you want to root for.