Keeps the jokes bustin, but never seems able to make up its mind on whether it's homage, remake, reboot, or sequel, and settles on all of the above. Made for toxic fragile fanboys and actual fans of the franchise alike.

Rated PG-13 for supernatural action and some suggestive references. 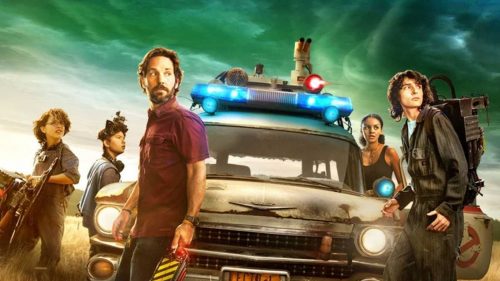 It’s a good time to be Paul Rudd. After just being named “Sexiest Man Alive” by People magazine, it doesn’t hurt to also be Ant-Man in the Marvel Cinematic Universe. Oh, and he also gets to play in the sandbox of yet another amazing IP this weekend in Ghostbusters: Afterlife. Rudd may not get to don a proton pack, but he’s clearly having a blast. In just about every ad you hear his line, “I’ve always wanted to do this,” and he’s speaking for all of us. With Jason (son of Ivan, also producing) Reitman helming/co-writing the (now) third film — yes, the internet trolls won so they can finally pretend Paul Feig’s comedic grand slam doesn’t exist — nostalgia reigns supreme in the ultimate battle between sequel, remake, and reboot.

The small town of Summerville, Oklahoma has a big secret. Summer school teacher/seismologist, Mr. Grooberson (Rudd), has been studying the town, trying to find out why there are daily seismic activities. Meanwhile, Callie (Carrie Coon) has just arrived with her two kids Trevor (Finn Wolfhard) and Phoebe (Mckenna Grace). Evicted with nowhere else to go, they are here to stay, to sort out her father’s “dirt farm” home, and try to get their life back on track. Unfortunately, the daily quakes turn out to be way more than any of them bargained for, but thankfully, Phoebe is well on her way to coming to terms with who her grandfather used to be. And with her love of all things science, she’s more than happy to light up an old proton pack and get to busting.

If there’s one thing working both for and, in some ways, against, Ghostbusters: Afterlife, it’s the amount of callbacks, references, and Easter eggs to the original film. Reitman also seems to slightly retcon Ghostbusters II by never mentioning the events from it. Reitman — and co-writer Gil Kenan (Monster House, Poltergeist (2015) — do manage to forge a newish story to open the box office to sequels, but it also gets very caught up in recreating scenes directly from the first film, just with better effects. Even Rob Simonsen’s score feels like a copy/paste job by simply laying Elmer Bernstein’s original score right over scenes instead of trying to use and build upon them with something new, à la Michael Giacchino and the Jurassic World films.

A nice touch is that the events in this film actually expand/explain why the events happened in 1984, but that’s the best the screenplay offers in the story department. Thankfully, the cast features the best/funniest Reitman could possibly have hoped for. Grace continues to be the fabulous up-and-comer she’s always been after having played the younger versions of everyone from Captain Marvel to Tonya Harding. Coon finally gets a chance to show what she can do in a mainstream film, while Wolfhard gets to be another charming, hilariously awkward version of Mike from Stranger Things. And Paul Rudd just steals the whole movie.

While I absolutely really liked the film, I didn’t quite love the film. This is in no way a slight, but Reitman had the chance to do way more with the Ghostbusters sandbox, and if the end credit scene indicates that there’s more to come, I’m more than happy to see what they can do now that they have the setup out of the way.