Internet be damned, Paul Feig and his amazing cast breathe new life into the gone-too-long franchise. Haters can suck it. Made for anyone with a sense of humor and isn't an internet troll.

Rated PG-13 for supernatural action and some crude humor. 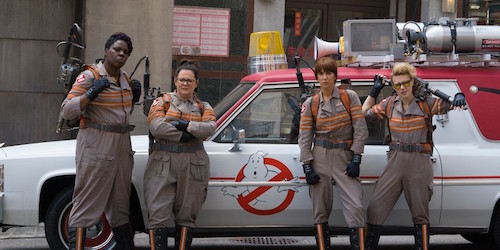 Ever since Paul Feig (Bridesmaids, The Heat, Spy) announced his Ghostbusters reboot, the internet trolls have become an unstoppable force of nature. But have any of them even seen the movie? I have, and so have a lot of other people. And I also have yet to hear anyone complain about it. Ungrateful little yuppie larva. Feig has taken a franchise that killed itself all the way back in 1989 and rebooted it in classic style. We have memorable characters, hilarious jokes, spectacular special effects, and delivery of one of the best reboots ever committed to film. I find it most ironic that those larva Ray Stantz was talking about are the exact same trolls trying to bash a film they haven’t even seen. So, as the age old question asks, who you gonna call? Ghostbusters!

It’s present day New York and a poor tour guide (Zach Woods) at the reportedly haunted Aldridge Mansion is about to find out the hard way that the rumors are true after he’s attacked by the ghostly Gertrude (Bess Rous). At Columbia, the mansion’s owner, Ed Mulgrave (Ed Begley Jr.), approaches scientist Erin Gilbert (Kristen Wiig) about a book she pretends to have never written. She’s trying to rid herself of its association to earn tenure at the university. This puts her back in touch with her old high school friend Abby Yates (Melissa McCarthy) who’s listed the book all over Amazon to earn some side money. Unwittingly, Erin joins Abby — and her lab engineer Jillian Holtzmann (Kate McKinnon) — to investigate Aldridge Mansion where they, of course, make first contact with a ghost.

After Abby puts the clip on YouTube, Erin has no choice but to find a new job, and the three decide to go into business for themselves. Unbeknownst to them, creepy hotel clerk Rowan (Neil Casey) is unleashing ghosts upon the city in an attempt to cause a ghostpocalypse and rid the earth of all humans. Now, the three ghost busting women are joined by forceful MTA employee Patty Tolan (Leslie Jones), who take on Rowan’s case, to figure out what his end game is before the mayor (Andy Garcia) and his assistant, Jennifer Lynch (Cecily Strong), can put a stop to their paranormal trappings.

Considering everyone was so fearful that the film would be too much of a remake — it still is — this is exactly how you do a reboot. Flipping plenty of the original film’s plotting on its ear, and stuffing it full of cameos, everyone has come back — aside from Rick Moranis — and, of course, Harold Ramis (RIP). Feig made everything old new again. Anyone who thinks the original cannot be touched has yet to bare witness to this updated Ghostbusters. It was a bit surreal to write the title down on my notepad before the film started — and I was just as hesitant as the next person. Let’s face it, Feig shouldered a huge responsibility here — but if you aren’t laughing hysterically from the first few lines of dialogue, you might as well walk out.

Feig and co-writer Katie Dippold (The Heat) invest the story with all new characters and a brand new story. It was very interesting to be introduced to the idea of Ley Lines and the way it’s used in the film reminds me heavily of Stephen King’s The Dark Tower, bringing a huge smile to my face. And they’ve also squeezed in one of the best Jaws — my all-time favorite movie — jokes I’ve heard in a move in a long time. Some may complain that the villain isn’t good enough, or that the ending was a little too simple. I can tell you this, Rowan is a fantastic villain, let alone the fact that he infiltrates the body of one of the film’s funniest characters — Chris Hemsworth’s hysterical Kevin — for the grand finale. That is before he takes on an even bigger manifestation that could take out the Stay Puft Marshmallow Man with one punch. Don’t worry, Stay Puft also manages to squeeze himself in for a cameo as well. And while we’re on the subject, as funny as Bill Murray’s may be, it’s honestly Aykroyd who’s the funniest.

Zip up your jumpsuits, strap on your proton packs, light em up, sit back and relax, and just let the summer’s best film wash over you with the nostalgia. Let the trolls spout their hate on the internet while the rest of us get out and have some fun. C’mon out guys, it’s OK to live a little. You’re the only one ruining your childhood. After all these years, it must be getting pretty stuffy in that basement of yours. Ghostbusters is nothing short of the original. While Ivan Reitman’s film will always hold a soft spot in my heart since it was the original, there’s no way they could do an outright sequel at this point. A reboot was the only way to go and Feig & Co. completely nail it.