The sweeter version of 'Ready Player One' we didn't know we needed. Made for anyone looking for something on the lighter side of the action spectrum. 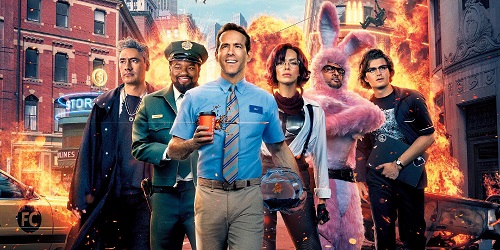 Free Guy is director Shawn Levy’s best movie — which isn’t really saying a lot. But he comes into his own here and shows just how much fun his past projects should have been. To be fair, they haven’t all been horrible. But for every This Is Where I Leave You, there’s a long line of Real Steel, The Pink Panther, Cheaper by the Dozen, Just Married, and three(!) Night at the Museums. Okay, that is most of them. Until now, his best work was found in directing six episodes of Stranger Things. Eventually, directors can finally find a project to match their skills and for Levy, Free Guy is that match.

Guy (Reynolds) loves his life in Free City, waking up to his goldfish, grabbing his daily cup of coffee, and working at a bank. One day, Guy runs into Molotov Girl (Jodie Comer), and an obsession begins. Little does he know, Molotov Girl is actually Millie, and he’s just a Non-Player-Character (NPC) in the video game “Free City.” In the real world, Millie developed a game called “Life Itself”— along with her best friend Keys (Joe Keery) — that was bought by Antoine (Taika Waititi), the owner of Soonami, who has hidden their AI code deep within “Free City.” Now, duty calls and Millie must join forces with Guy to find the code and save Free City, before Antoine covers up his nefarious plan forever with the launch of a “Free City” sequel.

Family-friendly scribe Matt Lieberman (Dr. Dolittle: Tail to the Chief, The Addams Family, Scoob!, and two Christmas Chronicles) may seem like an odd pairing to Zak Penn (X2, Elektra, The Incredible Hulk, The Avengers, Ready Player One), but the two balance the script exceptionally. Free Guy is disarmingly good-natured — and still features plenty of snark — while never being mean-spirited. It’s also filled to the brim with video game in-jokes, pop culture references, and hilarious cameos. Think of Free Guy as the sweeter version of Ready Player One and you have the right idea.