Long, confusing, and pointless. Made for Civil War reenactors and only the most dedicated McConaughey fans. 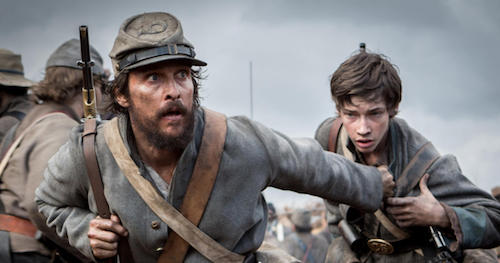 I’m not a big fan of the war film genre. And the subgenre of the American Civil War even less so. Glory and Gettysburg are great but they can’t all be that good. The problem is that these are the most boring wars ever put on film. It doesn’t help that there’s films like Gods and Generals that run a monumental 280 minutes, making you feel like you’re suffering through the war itself. The same can be said for writer/director Gary Ross’s latest, Free State of Jones, where not even Matthew McConaughey can save the film from feeling like an exercise in junior high educational videos.

Ross is no stranger to making quality pictures. He co-wrote Big, wrote Dave, along with writing and directing Pleasantville, Seabiscuit, and the first Hunger Games. So it’s more than a little bit of a letdown to see him strike out so badly with Free State of Jones. Considering he wrote and directed this himself, there’s no one else to blame. The pacing is extremely sluggish, even if the cast is doing the best they can with the material. It’s scary how long the film already is — clocking in at 139 minutes — yet suffers from choppy editing where half the time you have no idea what’s going on plot wise. Ross relies on title cards to deliver the exposition before a scene starts, but then the next scene never feels connected to what you were just told. The title cards are all filler; which is what most of the movie is. Lots of meandering around watching a whole lot of nothing take place.

There are some unintentional laughs to be had considering the film talks so greatly about corn, because the film is packed with corniness. Dunderheaded life lessons are bludgeoned on the audience while Ross never bothers to use them to make any actual kind of statement. It’s a shame with all the real life race issues we’ve been dealing with over the last few years. This is a far cry from Selma, or even Straight Outta Compton.