The Oscar race officially starts here! Made for racing fans and audiences looking for a human invested drama with plenty of humor to spare.

Rated PG-13 for some language and peril. 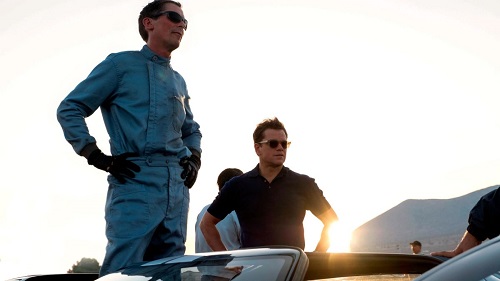 It doesn’t happen very often. The breathtaking feeling you get when walking out of a perfect film. Such was the case with James Mangold’s Ford v Ferrari — the racing film I never knew I needed. While it definitely isn’t what you’d call an action movie, the racing scenes are top notch and leave your jaw on the floor at every, err, turn. It certainly helps to have two of the best performances of the year bringing larger-than-life personalities — Ken Miles and Carroll Shelby — to the big screen. Matt Damon (Shelby) and Christian Bale (Miles) may not sound like first choices for co-starring opposites, but they play so spectacularly off each other that I wouldn’t mind them in plenty more things together.

Henry Ford II (Tracy Letts) has big plans for Ford Motor Company. He’s been informed by Lee Iacocca (Jon Bernthal) that Ferrari has gone bankrupt and Ford wants to merge. Unfortunately, that means Enzo Ferarri (Remo Girone) would also be giving up his racing division, Scuderia Ferrari, in the deal. Ford wants to use this as a way for Ford to try and win the 24 Hours of Le Mans race. When Enzo shuts Ford’s deal down, Ford turns to Shelby for help creating their first sports car. Problem is, Shelby needs Miles’ help and he’s “difficult, but good.” Sure enough, the two car conglomerates — along with Shelby and Miles — are in for the ride of their lives to come up with a car to win Le Mans and beat Ferrari at the race Ferrari has won five years running.

The last time I walked out of a screening so enthralled was The Departed. While this has a long way to go to the finish line — we’re only halfway through November — I can’t see too many more films coming together so precisely. Everything from the acting — Caitriona Balfe as Ken’s wife, Mollie nearly steals the show from Damon and Bale — to the screenplay, editing, cinematography, and sound design. Perfection. Mangold has an impressive history of making every film unique — maybe aside from The Wolverine and Logan. But you’d never guess this was from the man who directed Knight and Day, 3:10 to Yuma, Walk the Line, Girl, Interrupted, and Cop Land.

With Oscar season upon us — and my own voting imminent with the Utah Film Critics Association — it’s nice to see a heavy hitter finally come out of the woodwork. It’s been a fun year, but it’s about time it got kicked into high gear. When blockbusters have been more memorable than artsies, something’s amiss. And while I may not have the chance to see all the artsies, it’s fantastic when a Hollywood film gets to play double duty and have it both ways. Ford v Ferrari should not be missed and make sure you see it on the loudest — if not the biggest — screen possible.