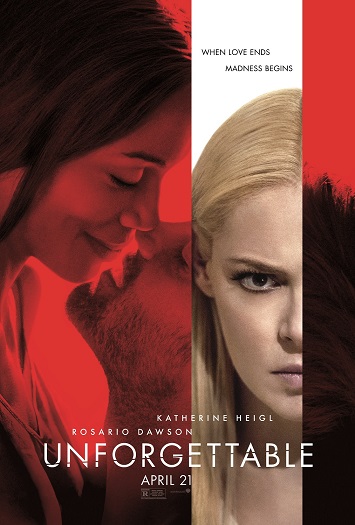 When love ends, madness begins. You and a guest are invited to a special advance screening of Unforgettable being held on Wednesday, April at 7PM in Salt Lake City! Click here to download your complimentary passes. (Passes admit two and do not guarantee admission, as theater is overbooked. Be sure to arrive early for ticket exchange!) Good luck and we’ll see you there!

Synopsis: Warner Bros. Pictures’ dramatic thriller Unforgettable is the first film in the director’s chair for veteran producer Denise Di Novi (Crazy, Stupid, Love, Focus). Katherine Heigl (27 Dresses, Knocked Up), Rosario Dawson (the Sin City films) and Geoff Stults (TV’s The Odd Couple) star in the film. Tessa Connover (Heigl) is barely coping with the end of her marriage when her ex-husband, David (Stults), becomes happily engaged to Julia Banks (Dawson) — not only bringing Julia into the home they once shared but also into the life of their daughter, Lily. Trying to settle into her new life, Julia believes she has finally met the man of her dreams, the man who can help her put her own troubled past behind her. But Tessa’s jealousy soon takes a pathological turn until she will stop at nothing to turn Julia’s dream into her ultimate nightmare. #UnforgettableMovie in theaters April 21.