Capturing the essence of the classic '80s teen movies, "Easy A" is sure to entertain any audience. Made for teenagers and adults that enjoy witty scripts or grew up watching John Hughes' '80s flicks. 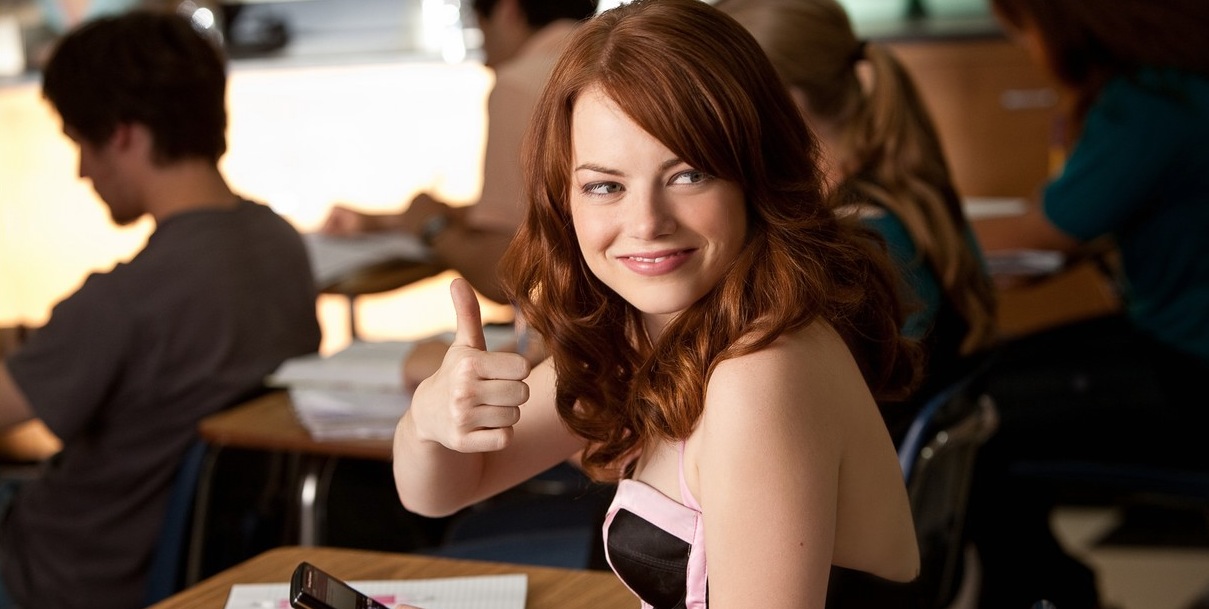 Most teen movies aren’t worth watching – let alone paying to see. But for the first time in a long time, a current teen flick has accomplished a level of entertainment that hasn’t been reached in one since the ’80s. Although the trailers and television spots for Easy A make it look like anything but quality entertainment, it is easily one of the best things in theaters this week.

Easy A gives Emma Stone (Zombieland, Superbad) her first shot as lead character Olive – an average, neutral-in-popularity teen whose life is completely turned upside down by a false rumor and her inability to not help those in need. It all begins with one white lie. To not have to spend the weekend with her “super slut” best friend Rhiannon (Alyson Michalka, Bandslam) and her hippie nudist parents, Olive uses the excuse that she has a date with a college boy. In reality, she spends the weekend nerding out at home with her family. At school on Monday morning, Rhiannon interrogates Olive about “how far they went” and pressures her to the point where Olive claims they went “all the way” just to get Rhiannon off her back. Little did they know that the school’s judgmental and freakishly Christian student Marianne (Amanda Bynes, Hairspray) was eavesdropping. It only takes a few minutes before the news of Alice losing her virginity hits the rumor mill.

While the much easier solution would be to come clean to Rhiannon and defend herself to everyone in school along the way, Olive gets caught up and turned around when a gay friend Brandon (Dan Byrd, Cougartown) asks her for help. Because everyone at school suspects Brandon of being gay – which he is – Brandon is always picked-on and beat up. With Olive already having a reputation of being a tramp, Brandon asks Olive to help spread a new rumor that the two of them slept together – building a “straight” rumor for him based on the credibility of her already established one.

I cannot think of a single other young female actress who could have pulled off Olive as well as Stone does. Emma Stone brilliantly shines here and shows that she is fully capable and more than worthy of carrying her own films. Expect to see her in Hollywood for a long time.

Stone’s natural spunk and charisma are only matched by the actors who play her memorably original parents – Stanley Tucci (The Lovely Bones) and Patricia Clarkson (Shutter Island). Any time those two are on screen they will have you dying from laughter. You will never forget their performances here.

Stone, Tucci and Clarkson are all fine actors, but they wouldn’t be great here without this intelligent and witty script. First-time big screen writer Bert V. Royal deserves recognition for this little gem. Let’s hope that he, like Stone, has a bright future ahead of him.

Even though Easy A appears to be a movie directed solely towards teenagers, the ads have been deceptive. More people will fall in love with Easy A than that small audience. If you enjoyed the teen flicks of awesome ’80s (like Say Anything, Ferris Bueller’s Day Off or Can’t Buy Me Love – all of which are referenced in Easy A), then I guarantee you will enjoy Easy A.