Skip this tepid remake and seek out the original. Made for not even the biggest Ferrell/Veep fans.

Rated R for language and some sexual material. 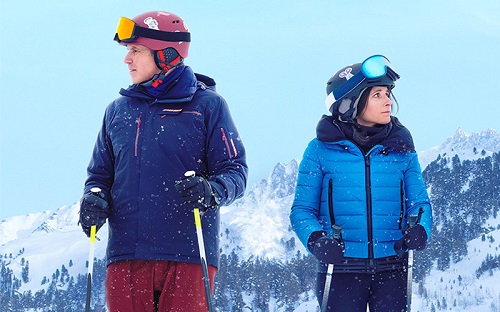 Maybe there really can be too much of a good thing. The talent in front of and behind the camera in Downhill sounds like a slam dunk. Nat Faxon and Jim Rash (co-writers of The Descendents and writers/directors of The Way Back)—✓ Jesse Armstrong (Oscar nominee/Emmy nominee/writer for In the Loop and Succession)—✓. Will Ferrell and Julia Louis-Dreyfus as a vacationing couple with marital issues—✓. Based on Ruben Östlund’s widely acclaimed black comedy Force Majeure—✓. Despite checking all the boxes, something went wrong, leaving the film to live up to its title all too well.

Pete (Ferrell) and Billie (Louis-Dreyfus) have just arrived at an Alps getaway with their two sons — Finn (Julian Grey) and Emerson (Ammon Jacob Ford) — in tow. While trying to retreat and help Pete deal with the loss of his father, they don’t realize they’re booked at an adults only resort. Try as they might, they embark on daily adventures until a controlled avalanche goes awry. Pete grabs his phone and heads for safety, leaving his family behind. Now, the couple must come to terms with Pete’s decision to run, and figure out if there’s any chance to return to a new sense of normal.

While Downhill is definitely a dramedy, Faxon and Rash keep the audience whiplashed with their tonal shifts. It’s neither as dramatic nor funny as it should be. The original film is labeled a black comedy — a genre I love — but this is definitely not. Think more of a bleak comedy.

Everyone involved knows how to handle material like this, it’s just too bad none of them are up to the task. Considering it took six years for the remake to finally reach theaters, that should give you some kind of sign. Remakes are pointless if they can’t even at least try to muster the tone of the original. And while I haven’t seen Force Majeure, it sure feels like a copy of a copy resulting from one too many cooks. I suppose if Downhill gets anything right it’s at least piquing interest in the original.