Never mean-spirited, but always in bad taste. Made for fans of Ferrell and Hart looking for a quick fix.

Rated R for pervasive crude and sexual content and language, some graphic nudity, and drug material. 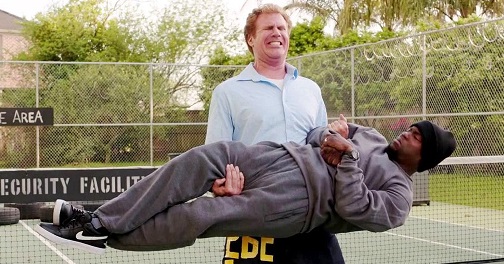 No comedian working today has a more forgiving fan base than Will Ferrell. The man can star in anything and fans will laugh at his antics. I am one of those — for better and worse. From Anchorman to Land of the Lost, the man makes me laugh. While the same isn’t true for Kevin Hart yet, he’s a terrific stand-up comedian stuck in mediocre movies. Together, they do make a fairly hilarious odd-couple in Get Hard, but the elicited laughs are of the guilty kind. The kind that are embarrassing to admit. Get Hard may not be a great movie, but it’s definitely culpable of being hilarious.

High-powered broker James King (Ferrell) is at the top of his game. He has a huge house, a beautiful fiancée (Alison Brie), and has just been named partner by his boss, and future father-in-law Martin (Craig T. Nelson). Darnell (Hart), who owns a car wash company that takes care of the cars driven by James and his associates, has dreams of making it big and scoring a house in a better school district for his wife and daughter. During King’s engagement party, the FBI arrest King for fraud and embezzlement. King claims he’s not guilty and gets put under house arrest before he’s shipped off to San Quinten. He makes Darnell an offer of $30,000 to teach him how to survive prison. Now, Darnell has to man up to stereotypes and make good on his skills while King tries to clear his name.

Get Hard has taken a lot of flack regarding its homophobic, racist elements, but it’s more harmless than some are making it out to be. I do see the issue with it’s wishy-washy attitude toward the two subjects, but Ferrell and Hart wring out enough laughs and and don’t wallow too long on the offensive. Director Etan Cohen (writer of Men in Black 3, co-writer of Tropic Thunder and Idiocracy) never lingers on most of the jokes too long, except for the most homophobic bit involving a stop at what’s referred to as the biggest gay hook up spot in town. Here an extended bit is completely unnecessary with Ferrell having to learn the “tricks of the trade” in a bathroom stall, while Hart gets uncomfortable being hit on waiting outside. We’re also thrown an even more unnecessary bit of male nudity which leads us to the film’s biggest issue: running 100 minutes.

There’s simply too much padding with Get Hard being basically a one-joke film. It’s a good thing he cast two of the funniest men working in Hollywood, otherwise it would have seemed far more mean-spirited. The whole film may be played with a wink at the audience, and while Ferrell and Hart can make the most of a one-liner, it doesn’t help that Cohen has given them too much lowbrow to wade through. The bottom line is that there are a lot of laughs to be had thanks to the leads, but you might feel bad about it later. I said the same thing about Hot Tub Time Machine 2. But at least Get Hard is better than that. This will probably go down as another blip on both Ferrell and Hart’s resumes, and will undoubtedly be forgotten within a few weeks.