Just because you're waving through a window, doesn't mean anyone has to be waving back. If anything, they should be waving this adaptation away in dismissal. Made for strictly the play's most hardcore fans. And even then, they may leave heartbroken. 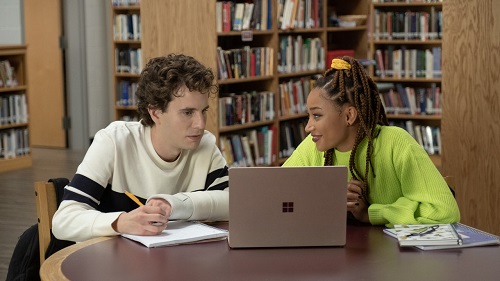 It turns out this wasn’t an amazing film after all. This isn’t going to be an amazing movie or an amazing motion picture. Because, why would it be?

Oh I know. Because there’s fanbase. And all your hope is pinned on them. Who you don’t even know and who doesn’t know you. But maybe if you did. Maybe if you could just not belt to the back row, then maybe…maybe something would be different after all.

I wish that most everything was different. I wish that your film was part of…something. I wish that anything you sang…mattered, to anyone but the fans I mean, face it: would anyone even notice if you didn’t release tomorrow?

Sincerely, your best and most dearest critic,

Ok, I know the film opened today — obviously, that’s just how the letter is written — but the only reason Dear Evan Hansen is ever going to be memorable is from how flat out awful it is.

Universal seems on a hot streak trying to outdo themselves with mediocre-to-horrible musicals. Two Mamma Mias, Cats and now this — throw in the towel before it’s too late!

Ben Platt’s “Evan” feels copy/pasted from a totally different movie. Considering he originated the role, it’s unfathomable how his performance is so bad here. Not to mention he’s burdened with horrible Broadway-belting-to-the-nose-bleeds singing. Director Stephen Chbosky’s constant close-up to medium shot cinematography, feels claustrophobic and like you’re being yelled at.

The rest of the cast do what they can to bring some kind of empathy to their characters, but when Amy Adams is insufferable, something has gone awry. Chbosky, or screenwriter Steven Levenson (adapting his own stage play), have also turned Evan into an exploitative stalker in his own sitcom world. It’s just one complication after another, with Evan just wanting to be liked, or loved, so badly, that he lies — a lot. Weirdly, Jared (Nik Dodani), a “family friend,” knows the truth, meanwhile fellow classmate Alana Beck (Amandla Stenberg) eventually becomes suspicious of Evan’s intentions and actions.

Having never seen the stage version, and never having heard the music, I have a few questions for Dear Evan Hansen:

For anyone looking for a film to shine a light on mental health, it does so, but not in the way it intends.

The few bright spots are Kaitlyn Dever’s portrayal of Zoe and Stenberg’s Alana. Stenberg also helped co-write a new song (“The Anonymous Ones”) for her character alongside Benj Pasek and Justin Paul. Both give quieter character representations with actual emotions that help show what their characters are going through. Forget about Evan Hansen, I want to see a movie about Alana and her anxiety/depression. (For anyone in need, please remember you can always reach out to the Suicide Prevention Hotline: 800-273-8255.) Moore also deserves praise for being able to act against Platt with a straight face.

Fans have been waiting a long time for this to finally hit the big screen — and as one of my closest friends who proclaims to be the show’s biggest fan told me after writing his review, he is heartbroken.

Fans will be divisive and anyone walking in blind will undoubtedly walk out scratching their heads wondering not only what they just watched, but will never understand what all the fuss was about, let alone how a movie got made in the first place.