'The Cabin in the Woods' for the whole family! Made for 'Goosebumps' fans, families, and even hardcore horror fans.

Rated PG for scary and intense creature action and images, and for some rude humor. 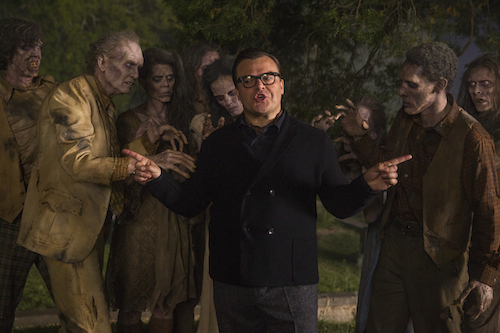 A big screen adaptation of R.L. Stine’s beloved Goosebumps was set to fail. Originally released as children’s horror books, it’s difficult to determine an audience. After both a live action and animated TV series ran their course, does anyone still care? Could there possibly be another story left to tell? The answer, to both, is a resounding yes.

Awareness is higher than you’d expect with both youngsters and their parents eagerly awaiting what almost works as the Goosebumps story to end all Goosebumps stories. To keep expectations in check, why not just find a way to throw all of the classic characters into one and have a giant monster mash? Well, that’s exactly what director Rob Letterman (Gulliver’s Travels, Monsters vs. Aliens, and unfortunately Shark Tale) and screenwriter Darren Lemke (Turbo, Jack the Giant Slayer, Shrek Forever After) have done.

In this entry to the Goosebumps canon, Zach (Dylan Minnette) has just moved from New York to Madison, Delaware. His mom Lorraine (Amy Ryan) is his high school’s new vice principal and they now live next door to the creepy “Mr. Shivers” (Jack Black), who just so happens to have a precocious teenage daughter Hannah (Odeya Rush). On the night of the big school dance, Zach thinks Hannah’s dad is abusing her and breaks into the house to save the day.

Joined by his forced-upon sidekick Champ (Ryan Lee), they discover that Mr. Shivers is actually author R.L. Stine. They accidentally unlock a Goosebumps manuscript they find on a bookshelf, unleashing the “Abominable Snowman of Pasadena,” that manages to unlock another book featuring the devilish ventriloquist dummy “Slappy” (voiced by Black). Now, it’s a race against time to save the town after Slappy starts freeing all of Stine’s creations and burning the manuscripts so that nothing can stop them.

Goosebumps seriously could be called the biggest surprise of the year. Full of likeable characters played with zest by the cast, everyone looks like they’re having a good time bringing Stine’s beloved creatures to life. Even supporting characters played by Jillian Bell and Ken Marino manage to score some chuckles. Sure, the special effects aren’t all top notch — the werewolf looks as hokey as the giant praying mantis looks fantastic — but what else would you expect from a family film?

The good news is the film delivers across the board. Featuring way more laughs than most comedies — especially those aimed at a younger crowd — the runtime is a nonstop rollercoaster of entertainment. The only comparison I can think of would be to call it “The Cabin in the Woods for the whole family.” It really is that much fun. It never gets too intense for the youngsters, and there are more than enough jokes that’ll fly over their heads for the parents. Goosebumps is family entertainment at its best and the most fun everyone can have as a whole.