Relies more heavily on sports film melodrama than the last round, but still manages to be the crowd-pleaser it needs to be. Made for rocky/Creed fans and those who have been waiting for the franchise return of Ivan Drago.

Rated PG-13 for sports action violence, language, and a scene of sensuality. 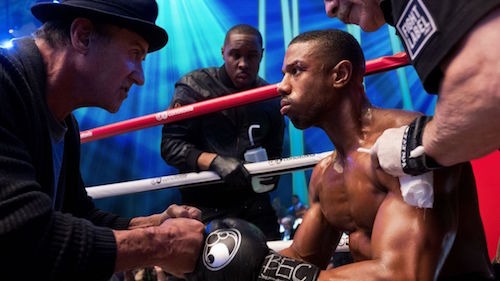 Looking back on my review of the first Creed — aka Rocky 7 — it makes me more aware of why Creed II didn’t sit as well this time around. Previously I said, “It helps that (Sylvester) Stallone took the backseat and didn’t even touch the screenplay, giving him the chance to loosen up for the camera.” While Stallone himself is still great in the film, he did co-write it with Juel Taylor, but at least he didn’t direct. Not that director Steven Caple Jr. can’t resist falling on hard and true sports film clichés by the finale, making this the type of Rocky movie I was hoping the Creed series wouldn’t become.

Considering my lack of background with the franchise — the only Rocky I’ve seen all the way through is Creed — it also doesn’t help Stallone has turned this outing into a direct sequel of Rocky IV, a film my guest advised is the worst Rocky. Not exactly terms of endearment, although, he did also state with Creed II, they’ve managed to make a fantastic sequel to a horrible ’80s movie. So I suppose at least it comes with his blessing as a franchise devotee.

The cast all perform admirably. Stallone continues to work better as a real character than he does when he’s trying to be the action hero. Those days are long gone. Jordan also carries the film on his shoulders granting Creed the humanity necessary to want audiences see him succeed. Let alone carry the franchise in his own character’s name. This is clearly Rocky’s swan song judging by the last 10 minutes of the film.

Tessa Thompson makes up for an underwritten role after being given way more fat to chew on last time. And Lundgren manages to keep himself from becoming comically Russian even if he’s reduced to mumbling with a thick accent and glaring menacing looks. Creed II falls on predictable sports film melodrama where the first film aimed for a more realistic character study approach. I also said about the first Creed that at times it felt more like a Rocky documentary with how alive the boxer’s world felt. Here, director Caple lays on the cliches fast and furious by the end. From the hoots, hollers, and clapping though, it’s super engaging for Rocky fans and that’s really all that counts.