A perfect little drama depicting the unforgettable story of Betty Anne Waters. Made for everyone - especially those who love historical true stories about defiant underdogs fighting a flawed system.

Rated R for language and some violent images 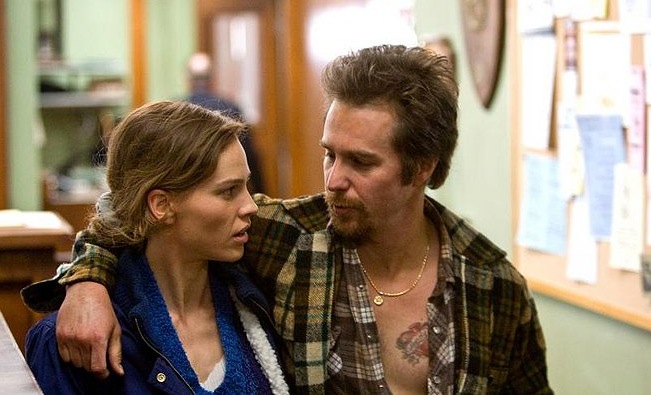 The story of Betty Anne Waters unfolded in front of the public eye, but in case you are unfamiliar with it, I will keep it relatively vague with the exception of the following paragraph.

SPOILER: Thirty years ago, DNA testing wasn’t yet brought to light and forensic evidence wasn’t anything like it is today. When DNA testing was put to use in investigations and criminal trials, lots of stories started coming out about convicted criminals that were then serving time in prison finally being able to prove their innocence. This newly discovered science changed everything. Ultimately, Conviction tells the true story of a woman who tried using this newly discovered science to exonerate her brother. END SPOILER.

Kenneth Waters was convicted for murder in Massachusetts in 1983. Despite damning testimony, his sister Betty Anne never doubted his own statement claiming he had nothing to do with the murder. After his conviction, Betty Anne decided to take matters into her own hands – all legally. Wife and mother of two, Betty Anne decided to go back to school to earn a law degree so that she could legally represent her brother. When her conviction cost Betty Anne her marriage, she took up a bartending job to pay the bills and tuition.

After receiving her degree and passing the Bar exam, DNA testing and forensic evidence was starting to take off. With the help of Barry Scheck and the Innocence Project, Betty Anne was determined to finally prove her brother’s innocence and have him exonerated – not even truly knowing if he was innocent or not.

In September, I had the opportunity of speaking with the real life Betty Anne Waters over the phone. I was baffled to hear her voice because had I not previously known that I was speaking to her, I would have thought I was speaking with Hilary Swank. Even Waters and her two boys admit that Swank nailed every aspect of play Betty Anne, especially the voice. Betty Anne talked about how impressive and humbling it was to see a large chunk of her life perfectly and honestly portrayed in front of her eyes on the big screen. It is nice to have a movie based on actual events be heralded as almost perfectly accurate by the person it is based upon. (Audio coming soon!)

In a year that has already had several amazing five-star films (something that doesn’t usually happen so early in the year), Conviction is easily one of the best of them. It is absolutely flawless, a must-see.