An awfully boring retelling of every thriller you’ve ever seen. Made for perverts and fans of cheap unoriginal thrillers. 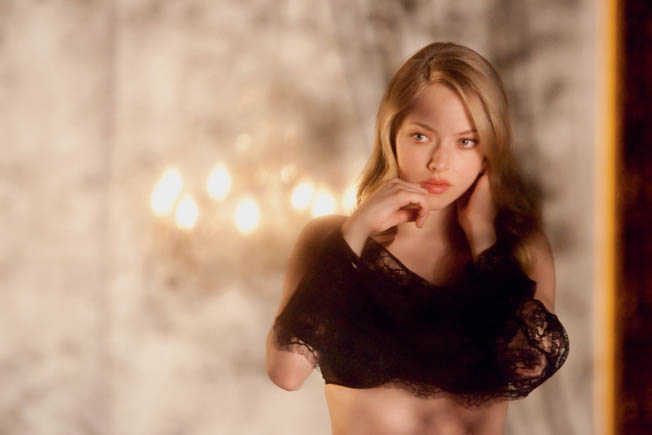 When an actress goes out of her way for a decade to avoid doing nude scenes in movies, then all of a sudden does one, it’s not only a sign that her career isn’t going anywhere, but that the movie she is doing nudity for isn’t very good. Such is the case with Amanda Seyfried (Jennifer’s Body) and her new film Chloe. After intentionally dodging nudity in several films, Seyfried bares all from the very first shot in Chloe and doesn’t stop until the end – just showing that she hasn’t been offered anything else to work with.

Although the film is named after Seyfried’s character, she does not play the lead role. Julianne Moore does. Moore (Boogie Nights) plays Dr. Catherine Stewart, a strong female who begins to suspect her husband (Liam Neeson, Taken), an accomplished Ivy League professor, of infidelity. Before confronting him, Catherine wants to be sure he’s guilty, so she hires Chloe, a seductive young upper class prostitute, to make advances on him. Before Catherine knows it, the results of her temptations throw every personal relationship off axis, hurting everyone she has ever cared about.

The first half of Chloe plays out like an intimate character study. Although not entirely enthralling, it’s not bad. But the second half turns into a thriller, not accomplishing anything we haven’t seen before in films like Fatal Attraction. Everything that you may have taken seriously in the first half becomes laughable in the second. Not even the outstanding performance by Julianne Moore can save this tediously painful film.

Sex can be a strong thematic element, but there is a point where it can be taken too far (see Closer – on second thought, don’t). It can take it from sensual, to outright dirty – and that it where Chloe repeatedly takes it over and over again, pushing the limits farther and farther each time. What should be sexy comes across as raunchy, unnecessary and perverted.

The performance by Moore alone is only worthwhile element to Chloe. There isn’t a single other noteworthy element in the whole film. If you plan on seeing something offensive this weekend, make it Hot Tub Time Machine – at least you’ll be entertained.