A convoluted mess that never comes together no matter how many nuts and bolts Blomkamp uses. Made for Blomkamp apologists only. 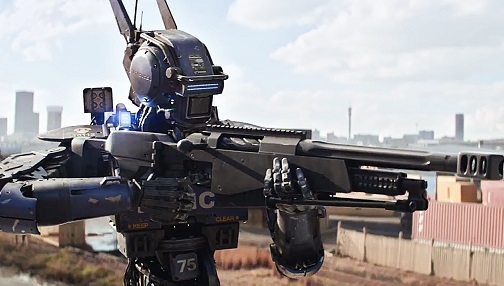 Neill Blomkamp exploded onto the Hollywood scene after District 9 wound up being a rightly deserved critical and box office smash. Fans hoped it proved a new sci-fi director finally knew what he was doing, expertly mixing allegory with spectacle. But something was amiss for most viewers with his follow-up Elysium. They felt it was a huge step backward, even though I remain in the minority who enjoyed it for being an action romp. Unfortunately, Blomkamp’s new movie Chappie is an even bigger disaster from start to finish. With a haphazard screenplay — co-written with his wife Terri Tatchell — it steals left and right from multiple movies, one of which is even worse than Chappie itself.

In the future, a new breed of police force is keeping the peace in the form of Robocops… err, robots. Created by Tretravaal employee Deon (Dev Patel), he is mildly celebrated at work by co-workers and his boss Michelle Bradley (Sigourney Weaver), especially after the recent purchase of 100 more robots for police use. Co-worker Vincent Moore (Hugh Jackman) is envious of Deon’s success because he can’t get funding for his giant-sized robot called ED-209… err, “The Moose.” In his spare time, Deon has been working to create an artificial intelligence program to implement into the robot programming allowing the robots to think freely and not have to rely on being run by humans.

Desperate to prove his AI programming works, Deon steals a robot meant to be destroyed and now Johnny 5 is alive! …wait, wrong movie. Chappie (Sharlto Copley) is “born” into the world and has the mental capacity of a toddler. Meanwhile, street thugs Ninja and Yolandi (played by South African hip-hop group Die Antwoord) and Amerika (Jose Pablo Cantillo) wind up owing $20 million to a kingpin after a botched drug deal. Ninja and Yolandi decide to kidnap Deon and train Chappie to their advantage for one big heist, while Vincent sets out on a personal vendetta to get his Moose on the loose.

As you can tell, Blomkamp has set a lot of plates spinning, all while trying to hammer the audience over the head with existential questions. Like, what really happens after we die? None of the storytelling he pulled off in District 9 has returned and Chappie winds up being his biggest disaster yet. This mess is filled with nonsensical characters you never care for, which doesn’t help with the awful acting of the Die Antwoord duo — who should never be allowed in front of a camera again. Talk about Razzie-worthy performances. We’re also treated to unnecessary subtitling for one character, while in another scene you can’t decipher a single word coming out of Jackman’s mouth.

It all culminates with a big finale full of the action you’ve been waiting for. But by the time you’ve trudged through the previous 90 minutes you’re already way too bored to care. The biggest problem with the film is really this. Imagine trying to watch District 9, Short Circuit, Robocop, Real Steel, and Transcendence, all at the same time. Blomkamp has a lot of ideas in that brain of his, but getting them to mesh coherently on screen fails miserably. The special effects may add necessary realism to the story, but the acting and pacing offset everything before it finally goes completely off the rails in the final act.

Chappie also suffers from a huge case of Return of the King-syndrome as it never knows when to finally call it quits and has multiple false endings. Had Blomkamp created a world worth spending time in, or characters worth investing in, this would be excusable. Unfortunately, he never comes close to both. Chappie is a lot of flash and noise for the Transformers audience, and hopefully, maybe 20th Century Fox can rein him in with his recent announcement of a new Alien sequel. But considering they fiddled so much with a Joss Whedon screenplay (see Alien Resurrection), I have no hope for a quality product; something not even Chappie can provide. Chappie is for Blomkamp apologists only.