A step above "King Arthur," "Centurion" fails to make the early A.D. years entertaining. Made for fans of Clive Owen's "King Arthur". 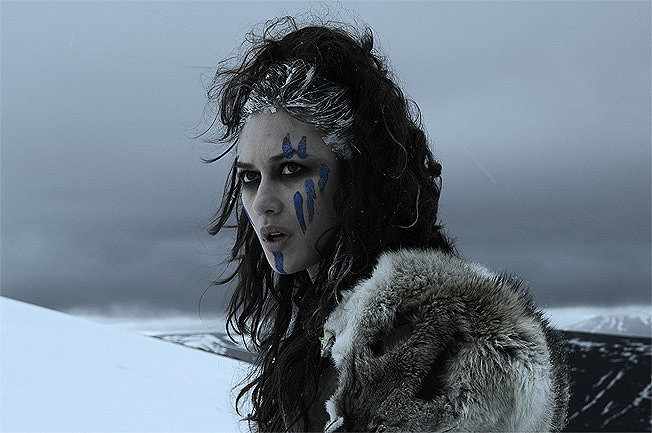 Considering how big-budgeted and expensive this Roman epic looks, I was surprised to learn that Centurion was only being given a limited theatrical release. After seeing it, I now know why – at its core, Centurion is nothing more than a gory B-movie.

The year is 117 A.D. and the Roman Empire is trying to make one last push near Germany to overtake the Pict army’s defensive line. The movie follows Roman centurion Quintus Dias (Michael Fassbender, Inglourious Basterds) who recently escaped from a Pict prison camp and has reunited with a strong Roman legion.

When their legion puts their trust in a former Pict turned Roman tracker (Olga Kurylenko, Quantum of Solace), they are betrayed and nearly entirely wiped out in a Pict ambush. Quintus and a few other survivors are now stuck behind enemy lines, far from home and any other legions, being hunted by the most notorious and merciless Pict warrior.

Centurion has great potential, but fails to capture it. While the story could be absolutely riveting, the flat characters within it give you nothing to root for. Sadly, Kurylenko’s villainous character is the only one with backstory – a backstory that is so tragically painted that you honestly sympathize with her and her motives over our supposed heroes.

Imagine the gritty realistic battle gore of Gladiator mixed with the over-the-top blood spattering effects of any modern horror movie. That is exactly how all of the battle sequences play off in Centurion. 300 did the exact same thing, but the movie was so highly stylized that the gore on that level worked harmoniously with what it was trying to do. In a movie with such a bland color palette, the cherry-red blood spraying throughout Centurion will constantly take you out of the movie.

Another element that removes you from getting into Centurion is the language used. Not only is the dialogue boring and uninteresting, but the script also uses profanity found in modern movies. It is hard to believe that the Roman soldiers of 117 A.D. were using the F-word in the same manner that it is used today.

But the biggest problem with Centurion lies within the editing – there is either too much or too little going on at any given time. During action sequences it quickly cuts back and forth to brief shots of fighting between various different characters. You can hardly tell whose fight you are watching, let alone keep track of who is winning each fight. This even happens during the main showdown at the end of the movie. Quintus’ fight is the most important thing going on, yet we keep being brought back to watch others in their insignificant scuffles. And when action is absent, so is your mind. This movie would be nothing without its action.

Centurion feels like a bad “epic” from the ’80s – like Excalibur – featuring the filming styles, violence and language of today. Although it wants to be more, Centurion never leaves the B-movie stage.