Never exactly terrifying, but unsettling, unnerving, and timely, with plenty of allegories to spare. Made for fans of the original who have been waiting for a worthy successor.

Rated R for bloody horror violence, and language including some sexual references. 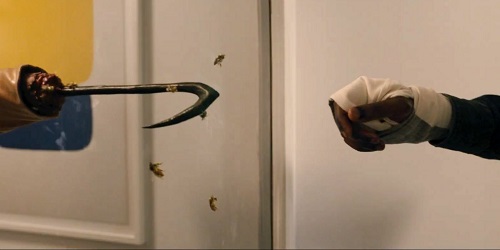 It’s interesting to see Nia DaCosta’s Candyman being labeled as a “spiritual sequel.” It’s directly tied to the original 1992 classic. Be it on-screen or referenced characters to returning actors, this is a sequel. And it’s a sequel fans have been waiting for. DaCosta — along with co-writer/producer Jordan Peele — delivers the gore and expands the mythology in spades, even if motives start to feel a little murky in the third act. Looking past that, Candyman lives up to expectations while making sure to offer enough to draw in newbs such as myself, all while expanding the mythos as all good sequels should.

Anthony (Yahya Abdul-Mateen II), is a codependent artist living in the gentrified Cabrini Green neighborhood of Chicago with his art gallery director girlfriend, Brianna (Teyonah Parris). In need of inspiration, Anthony is about to get more than he bargained for after a chance encounter with William Burke (Colman Domingo) when he confirms the Candyman legend to Anthony. Anthony ventures out into the old Cabrini Green, where he gets the idea for a Candyman-inspired piece — titled “Say His Name” — unleashing the murderous rampaging myth to reign vengeance upon anyone who says his name five times. Now, Anthony must make a choice to keep the genie in the bottle or let fate run its grisly course.

Allegories shared, blood spilled, pulses pound. DaCosta’s Candyman isn’t the scariest film ever made, but it never tries to be. It’s more unsettling. Filled with amazing performances, and meticulous direction — the shadowbox puppet sequences especially — Candyman successfully updates the story while paying respect to the original. The why may get a little muddled, but isn’t that always the case when it comes to urban legends? It’s all about the bigger picture and Candyman builds to a fantastic final scene that may, or may not, lead to more sequels. Peele and DaCosta — along with additional co-writer Win Rosenfeld — end on just the right note that more films aren’t necessarily needed. To be able to create a sequel/reboot that also works as a stand alone is its own feat.