Strike a pose and dust off your ledgers, Marvel's return to the big screen was worth the wait! Made for MCU/Black Widow fans who have been dying to return to theaters. We know who we are.

Rated PG-13 for intense sequences of violence/action, some language and thematic material. 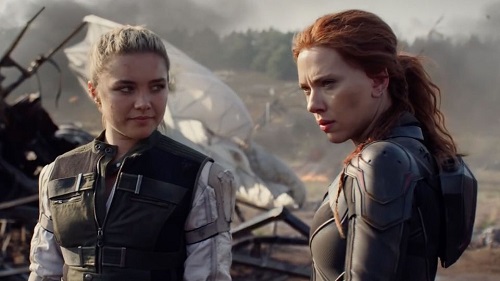 Our favorite S.H.I.E.L.D. agent finally gets her own film, but does Black Widow live up to the hype? While expectations may be ridiculously high, your enjoyment may depend on your affinity for Natasha Romanoff. Haters gonna hate — for me it was certainly worth the wait. And we’ve been  waiting 11 years since Iron Man 2 was released. What Black Widow manages to do best is work as an endearing passing of the torch, provide Natasha some personal closure after her fate in Endgame, and serve as a rousing addition to the likes of Bond, Hunt, and Bourne. While you can pick between theater and Disney+ Premiere Access — the big screen is the way to go. Also, there is 22 minutes of expanded ratio footage if you partake in IMAX.

After the events of Captain America: Civil War, being on the run from Thaddeus Ross (William Hurt) is no easy task, but Natasha (Scarlett Johansson) has finally managed to escape to seclusion. Meanwhile, Natasha’s “sister,” Yelena Bolova (Florence Pugh), has just discovered the antidote for the mind-control her fellow “widow” spies are under and sends it to Natasha. Now, Natasha is having a family reunion of the dysfunctional kind, as she must join forces to take down the Red Room with the help of her “family” — Yelena, Melina (Rachel Weisz), and Alexei the “Red Guardian” (David Harbour) — after she learns that her archnemesis, Dreykov (Ray Winstone), is not only alive, but hellbent on finishing her off by sending the “Taskmaster” after her.

The stakes are working against Black Widow. We already know nothing too horrible is bound to happen to Natasha before the credits roll. Having become so accustomed to every MCU outing setting up something else, it feels odd that the only time this happens is in the post-credit scene — that we know. Screenwriter Eric Pearson has taken the high road and makes things personal for Natasha. With WandaVision’s Jac Schaeffer’s fingerprints all over it, we also get heavy doses of regret and reconciliation. Marvel is finally taking time to make audiences feel something aside from ’splosions. They also manage to point out a few of the more ridiculous aspects of the MCU with some jokes teetering on meta.

With a two-year theatrical hiatus behind us — with the exceptional Disney+ trio of WandaVision, The Falcon, err, Captain America and the Winter Soldier, and Loki — Black Widow manages to provide the best of both worlds. MCU movies have never relied on heavy characterization and dialogue, but the D+ shows revel in it. Working from Schaeffer’s and Ned Benson’s story, Pearson is able to prove that he can write character-driven summer blockbusters. Something he was raked over for Godzilla vs. Kong which relied explicitly on action. Not that there’s anything wrong with that, but it just wouldn’t have worked here.

While some may cry foul for a man writing the screenplay, don’t worry, Black Widow is stuffed to the gills with girl power from start to finish. Director Cate Shortland brings her A-game, with spectacular action scenes to pair along with the banter. Having a cast made up of Johannson, Pugh, and Weisz certainly doesn’t hurt.

The best way to approach Black Widow is to think of it as a one-shot. It works to fill in some gaps and provide its own exhilarating adventure, while bridging Natasha’s whereabouts between Civil War and Infinity War. The passing of the torch from Natasha to Yelena goes off without a hitch, as Johannson finally gets her due in a solo outing, with the rest of the cast introduced for possible further use in the ever expanding MCU. Red Guardian may be a punching bag of sorts, but you can see this man truly loves his “daughters” and “wife,” even if they were all just part of a cover. Pugh continues to be the highlight of everything she’s in and with Yelena already cast in future MCU installments, she’s going to be a continued delight. Black Widow may not be the be-all-end-all of Marvel movies, but it makes for a spectacular return to theaters for both the audience and the MCU.