Thanks to it's hilarious cast, the creators of 'The Hangover' deliver the funny for the ladies. Made for moms and anyone with a sense of humor who can relate. 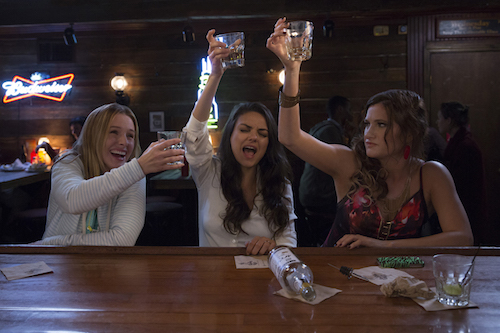 Considering how subjective comedy is to begin with, it doesn’t help when you’re a mid-30s male with no kids walking into a movie called Bad Moms. Now, this isn’t that kind of movie about “bad moms.” Although I wouldn’t put it past the writing/directing team of Jon Lucas and Scott Moore. The duo hit the big time when Warner Bros. greenlit a sequel to their as-yet-unreleased debut The Hangover — you may have heard of it.

You’d never know they were the same writers who faked their way through Four Christmases, Ghosts of Girlfriends Past, and their first time behind the camera, resulting in one of the worst films ever made, 21 & Over. Not even David Dobkin (Wedding Crashers) could save their so-called comedy The Change-Up. When you have two hilarious men — Ryan Reynolds and Jason Bateman — in such a horrible film, something’s gotta give.

So it was with supreme caution that I approached Bad Moms. Could they redeem themselves or sink to new lows? And what in the world would two lowest common denominator loving directors possibly know about being a mom? Turns out, way more than you’d think.

Amy (Mila Kunis) quickly introduces us to the whirlwind that is her life. She had her first kid, Dylan (Emjay Anthony), when she was 20 and would walk through fire for both Dylan and 12-year-old Jane (Oona Laurence). After she discovers her “third child” husband Mike (David Walton) has been cyber cheating on her, Amy kicks him out and quickly decides that she’s tired of being the best mom in the world. Now, Amy is taking a stand against the PTA President/bully Gwendolyn (Christina Applegate), and her minions Stacy (Jada Pinkett Smith) and Vicky (Annie Mumolo), to prove that it doesn’t take a spic and span homelife to dominate. Along with fellow moms Kiki (Kristen Bell) and Carla (Kathryn Hahn), they’re putting their tits up to tackle everything from the wild world of dating to running for PTA president.

If Bad Moms has one thing going for it, it’s the cast. Everyone looks like they’re having the time of their lives playing everything as catty as they can. I did bring along a “bad mom” with me to the screening — along with my wife and some other female friends — and was told that as exaggerated as everything may be, it all rings way too true. Kunis plays a mom that any man would be lucky to have and continues to be an underappreciated comedic juggernaut. Bell plays the submissive wet blanket expertly, and you can tell that she’s having fun playing against type — while having a Forgetting Sarah Marshall reunion with Kunis. And damn it all if Hahn doesn’t steal the movie right out from under everyone. She’s been playing hilarious side characters for years and it’s about time she got more screen time.

Lucas and Moore may rely far too heavily on montage sequences and slo-mo for comedic effect, but here, it works. It may get a little clunky when it starts to get a little more serious, but they do manage to redeem themselves by the time things start to wrap up. Just when characters seem to be acting out of left field, they reign everything back in and tie things up in a nice little bow. Bad Moms also feels like the kind of film that would normally be overloaded with cameos, but the only one here is also a really funny one.

In the end, we came for the funny and Bad Moms more than delivers. It does start to feel a little long, but these 101 minutes fly by way faster than some of the year’s shorter films. Bad Moms is no bad movie and hopefully it finds itself an audience acting as excellent counter-programming to all the big budget summer blockbusters. It’s a nice surprise and a breath of fresh air for those who just want to sit back and laugh. It may not be as funny as Mike and Dave Need Wedding Dates, or Ghostbusters, but for those who want to see it, it’s a rollicking time at the movies and moms will eat it up.