'American Ultra' has the making for a solid action comedy, but has tonal schizophrenia and horrible execution. Made for stoners who love '90s stoner movies.

Rated R for strong bloody violence, language throughout, drug use and some sexual content. 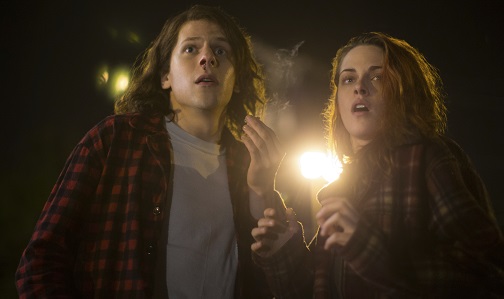 Summit Entertainment has been fully distributing movies for years (that is, until they were acquired by Liongsate). Many of their titles were very promising, but I quickly learned to not get my hopes up for any of them. Several are undeniably fantastic, but most completely miss the mark. Push, Knowing, Remember Me, Red, Red 2, The Beaver, The Three Musketeers, Alex Cross, The Impossible and Ender’s Game – each of those Summit movies could have been excellent. Unfortunately, American Ultra suffers the same fate as those flicks: great idea, terrible execution.

Meet Mike Howell (Jesse Eisenberg), a simple-minded stoner who only loves one thing more than pot: his girlfriend Phoebe (Kristen Stewart). The two live in a blissful haze of ignorant happiness. He works in a convenient store and she works behind a desk. All that they need in each other … and marijuana. Life couldn’t be any better – but isn’t that when everything usually hits the fan?

Unbeknownst to Mike, before meeting Phoebe, he was part of a Jason Bourne-esque CIA operation to make super soldiers. Somewhere in there, his memory was erased and he was let go – but now that a power-hungry CIA decision-maker (Topher Grace) wants to erase the now-closed program for good – meaning “kill the former participants” – Mike is being “activated” so that he can defend himself from the dozens of soldiers and military experiment psychotics that are coming after him. When a key phrase is uttered to him, his mind starts to open up and the deadly training that lies deep within his mind is released. Like an amnesiac spy, defense comes second-nature for survival and instead of running away and hiding, he and Phoebe intentionally walk straight into it.

American Ultra has no idea what it wants to be. It can’t decide whether it wants to be a sweet little violence-filled love story like True Romance, or a stoner action comedy that mixes Half Baked with The Bourne Identity, or if it wants to be an indie comedy that requires an acquired taste. It’s all over the place. The sad part is that many of those elements work very well on their own throughout the movie – but when combined with one another, it’s a gigantic mess. The tone can and will shift drastically from scene to scene, making it sloppy and inconsistent.

You’d have to be high to walk away from American Ultra satisfied.