A Beautiful Day in the Neighborhood

It may not have completely won me over, but Hanks and Rhys make one of the year's best odd couples. Made for fans of Mr. Rogers' life lessons who still has plenty more where that came from.

Rated PG for some strong thematic material, a brief fight, and some mild language. 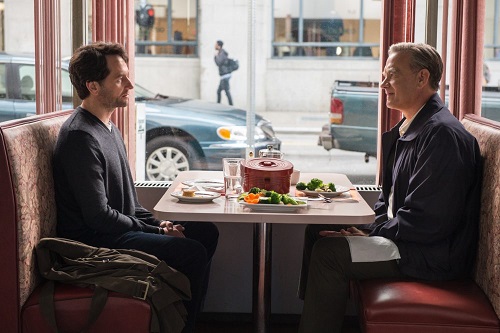 The entire crux of A Beautiful Day in the Neighborhood is a stuffed animal. While we never see journalist Lloyd Vogel’s (Matthew Rhys) “old rabbit,” we don’t need to. It’s brought up during an interview between Vogel — a fictionalized version of Esquire writer Tom Junod, whose 1998 article, “Can You Say… Hero?” is the inspiration for the film — and Fred Rogers (Tom Hanks).

Yes, Mr. Rogers has found the way to a pessimist’s heart, and it’s bound to hit hard with audiences. Whether you grew up watching Mister Rogers’ Neighborhood, or didn’t — I did not — it still strikes a chord.

My now two-year-old loves her stuffed Dory, I had Kermit, and my wife, Tigger. While it never punched hard enough to make myself cry, based on the sniffs and whimpers heard at the screening — perfectly timed for the evening of World Kindness Day — spoke for themselves. Something made all the more surprising once you come to realize the film isn’t even actually about Mr. Rogers. It’s actually based on Junod’s article which is way more about himself than dear old Fred. It’s also from director Marielle Heller (Can You Ever Forgive Me?) who clearly loves writers, warts and all.

Vogel has a chip on his shoulder and uses that to his advantage with his award-winning Esquire exposés. He’s estranged from his father, Jerry (Chris Cooper), and just wants to keep his home life isolated to his wife Andrea (Susan Kelechi Watson), and son Gavin (played by triplets Jordan, Naomi, and Zoey Harsh). But acceptance and understanding comes calling after his editor assigns him to a “fluff piece”: interviewing Mr. Rogers. Now, Vogel gets more than he was looking for as life lessons are learned and heart strings get pulled.

For anyone worried about Hanks performing a caricature, fear not. Once we jump into the first scene you’ll quickly realize that no one else could ever have brought such an icon to life. The film oozes sincerity and never tries to make you think Mr. Rogers may be more than a facade. A great exchange between Vogel and Joanna Rogers does let us in on him being more human than folks may believe. We learn he does have a temper and doesn’t mind banging it out on some piano keys when needed. And who can’t relate to that?

The film plays out like a feature length episode and works all the better for it. Heller isn’t scared to get a little surreal here and there. Transitional scenes are sets right out of the TV show and they come into play for more than just recreating the WQED world of imagination. The rest of the cast all perform admirably, and most will still be surprised to see Hanks in a supporting role. But it’s absolutely going to earn him an Oscar nomination regardless. And with how earnest the film is, prepare for A Beautiful Day in the Neighborhood‘s title called out for a Best Picture nomination, too. It could stand to get overshadowed, but it’s every bit worthy. This is a film worth being neighbors with and you’ll be glad you stopped by.