Rated R for language including some sexual references, and a brief violent image. 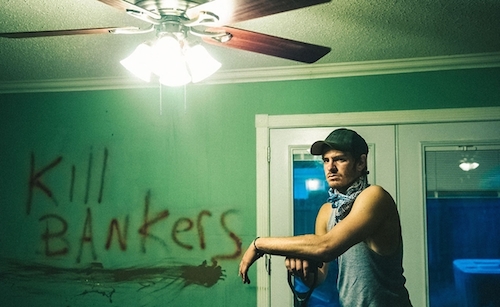 Being a homeowner now makes me relieved I wasn’t seven years ago with the housing crisis. With families being evicted left and right, you might feel a little disconcerted watching writer/director Ramin Bahrani’s 99 Homes if you’ve purchased a bank-owned home. With that being said, it never really makes you feel bad for these families either. Making its debut at the Venice Film Festival last year — it also played this year’s Sundance Film Festival — it’s full of outstanding performances from Andrew Garfield and Michael Shannon. And they are the reason the film works.

Dennis Nash (Garfield) is a down-on-his-luck construction worker, barely getting by. So much so that he heads to court to try to keep his family home, but not without it winding up in the hands of the bank. Now, Nash, along with his son Connor (Noah Lomax) and mother Lynn (Laura Dern), are forced to move into a motel, living amongst other fellow evicted families.

Through chance, foreclosure realtor Rick Carver (Shannon) takes Nash under his wing. As it happens, Rick is the same man who tossed them out of their own home. Offering Nash the chance at some real money, he goes to work for Carver, cleaning up the same homes Carver is evicting people from — essentially making him the biggest hypocrite ever. With opportunities rising, Nash’s new job finds him pitted against a brutal morality struggle.

99 Homes definitely feels like a Sundance film, even featuring a tried and true sudden ending. It was something that felt like an epidemic at this year’s festival, so it didn’t come as much of a surprise that once the film found a resolution, it quickly rolled credits. However, Bahrani and co-writer Amir Naderi definitely make the viewer unsure of which side they should be on. Who wouldn’t pass up the opportunity to make enough money to buy their own house back?The moral complicity seethes through Garfield’s performance — this is a father at the end of his rope.

But the real star of the film is by far Shannon. The man is electric and terrifying, solidifying yet another potential Best Supporting Actor nod, standing right alongside Benicio del Toro in last week’s Sicario. The story may be average, but the directing and acting are top notch, making 99 Homes yet another reason to be thankful for all the adult entertainment being delivered this fall.