First impressions reign supreme. See it at least once, on the biggest and loudest screen possible. Made for fans of war films and those looking to see an extraordinarily immersive film unlike very few.

Rated R for violence, some disturbing images, and language. 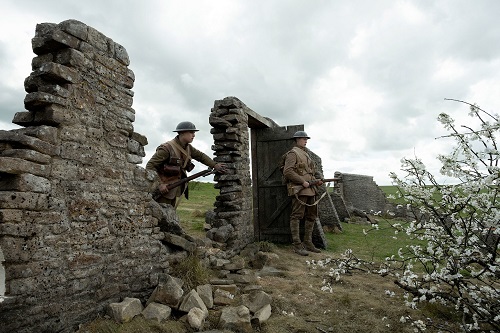 The first time I saw 1917 was over a month ago. An instant review probably would have hailed the film as the year’s best. However, upon a second viewing, a little something was lost—namely the immediacy of the plot. It’s a race against time for Lance Corporate Blake (Dean-Charles Chapman) and his sidekick Lance Corporal Schofield (George MacKay) as the two set out on a mission to save 1,600 men—along with Blake’s brother—from a trap set up by the German’s in occupied France during WWI.

Director Sam Mendes has a long line of brilliantly directed films: American Beauty, Road to Perdition, Away We Go, Skyfall. With the exception of some heavy handedness along the way (Jarhead, Revolutionary Road) and some clunky storytelling (Spectre) the man can cover any ground from drama, to action, to comedy. If I was going with gut instinct from last year, this would have been a full-blown five-star extravaganza. Unfortunately, once you’ve seen it, you start to become distracted by the gimmick.

1917 is beautifully filmed by Roger Deakins and made to look like it all takes place within one continuous shot. While these types of films are few and far between — Birdman and Rear Window are the only two that really matter — the acting starts to fall flat when the urgency is out the window. If you’ve seen the film, you obviously know how it’s going to end, surprises lay by the wayside, the acting becomes a little dull, and you’re very distracted by the technicalities of the filmmaking.

Don’t get me wrong, it’s still a brilliantly made film. It’s just a shame that the story doesn’t hold up to repeat viewings. I would never go so far as to say that the film is simply a two-hour trick. However, for something to be declared “best film of the year,” it should probably be able to hold up to repeat viewings. Maybe it was a case of watching it again too soon. Once available in 4K, touting a surely raucous Dolby Atmos track, perhaps it can make for a better rewatch.

As it stands, 1917 is still a film that shouldn’t be missed in theaters on the biggest and loudest screen possible. But it’s not something you’re going to be rushing out to see again any time soon. Nominations are sure to be poured on come Oscar nominations being announced — and they’re absolutely warranted — but seeing the film once may be best to ensure maximum shock and awe.