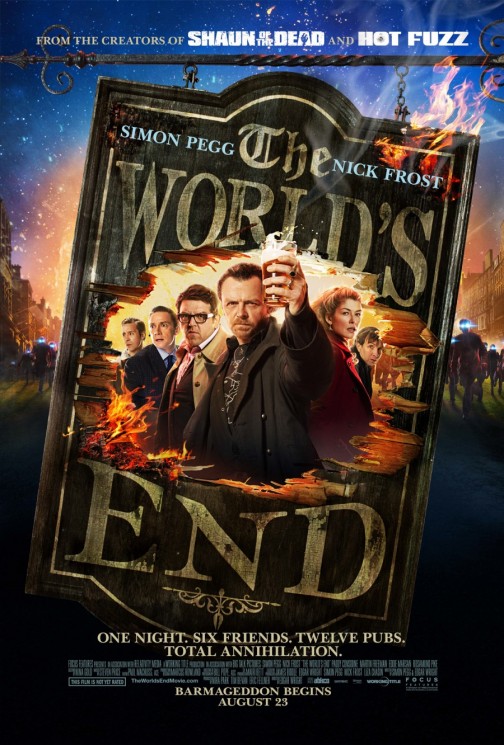 The Reel Place is excited to offer you passes to a brilliant special screening the hilarious third film in the “Three Flavours Cornetto” trilogy, THE WORLD’S END, being held on Thursday, August 22 at 7PM in Salt Lake City, Utah. Enter for the chance to win an admit-two pass by texting the word GOLDEN MILE and your zip code to 43549! (ex. GOLDEN MILE 80302.) Passes do not guarantee admission. Seating is on a first come, first seated basis. The theater will be overbooked, so arrive to exchange your pass for an actual ticket. See theater for exact exchange time. THE WORLD’S END opens in theaters on August 23!

Date/Time of Screening: Thursday, 8/22 at 7PM
Deadline for Entries: Tuesday, 8/20
Date/Time Winners Will Be Notified: Wednesday, 8/21 at 5PM

Director Edgar Wright and actors Simon Pegg and Nick Frost reunite for a third film following the successes Shaun of the Dead and Hot Fuzz. In THE WORLD’S END, 20 years after attempting an epic bar crawl, five childhood friends reunite when one of them becomes hell-bent on trying the drinking marathon again. They are convinced to stage an encore by Gary King (Simon Pegg), a 40-year-old man trapped at the cigarette end of his teens, who drags his reluctant pals to their hometown and once again attempts to reach the fabled bar – The World’s End. As they attempt to reconcile the past and present, they realize the real struggle is for the future, not just theirs but humankind’s. Reaching The World’s End is the least of their worries.